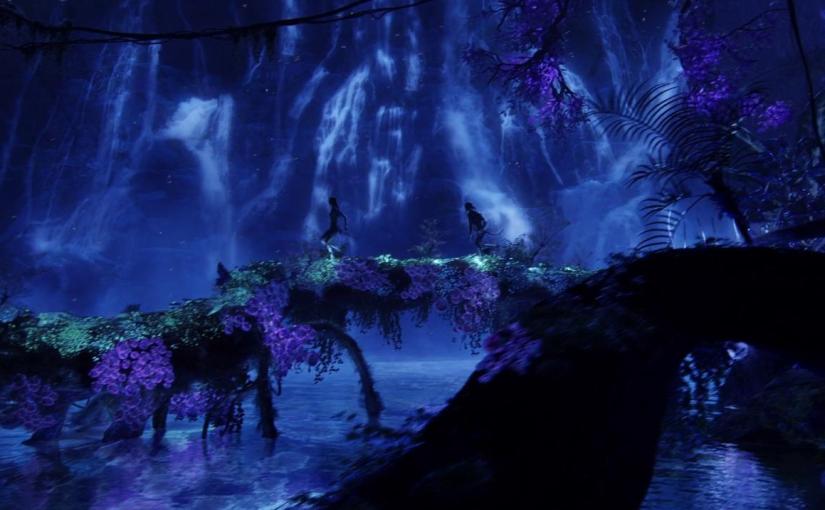 There are few films that have had as contentious a spot at the top of the box office as Avatar, financially topping James Cameron’s previous record-breaking epic, Titanic, facing backlash from those claiming it’s nothing but empty spectacle, and then in more recent years finding renewed support in the backlash to the backlash. There’s no doubt that it is a technological marvel as well, though when this metric is used as the sole arbiter of success then naturally it is easy to see how quickly such films can grow outdated – one simply needs to look at the latter half of Robert Zemeckis’ career to see how this prioritising of scientific innovation over art does not instil a movie with great longevity. Cameron may be uniquely suited to the ideal synthesis of both, recognising how the creation of photorealistic visual effects is not an end unto itself, but simply serves an incredible visual aesthetic that even the most CGI-heavy blockbusters of the past decade have failed to live up to. He has pulled off this smooth integration before in the Terminator franchise and Titanic, and Avatar belongs right alongside those as monumental achievements of genre filmmaking and world-building.

It is no wonder that it took Cameron fifteen years to develop the fictional creation of Pandora, given how exceedingly detailed and complex it is. Rather than writing out lengthy historical chronicles as J.R.R. Tolkien did with The Lord of the Rings, he developed field guides around the alien ecosystem of the moon populated by the Na’vi. What we see in Avatar only covers a small percentage of that material, focusing predominantly on the Omatikaya clan and their surrounding jungle habitat, though the film’s immersive environment thrives on the small, otherworldly pieces hanging on the periphery which hint at a richer world than we can imagine. A blue, Jupiter-like planet dominates the sky, dotted with several other moons in orbit, and setting a gorgeous celestial backdrop that feels at least partially inspired by the dual suns of Tatooine in Star Wars. On the forest floor, the plant life is extremely sensitive to physical touch, withdrawing into pods and pulsating with light as characters run across its surface. Exposition is heavy in the opening, though once we are done with this Avatar’s visual filmmaking takes over, immersing us in its colonialist fable that regards the interconnectedness of all life with great, mystical reverence.

Cameron’s entire career is built on the mythological storytelling of historical legends and genre archetypes, so it is no outrageous statement that his talents as a writer are superseded by his bold direction. The flaws in the screenplay are evident, giving heavy-handed names like ‘unobtanium’ to significant plot devices and at times rejecting subtlety in favour of on-the-nose dialogue, but these are far from dealbreakers. This story is predominantly a visual one, representing the three main human characters outside of former Marine Jake Sully as icons of war, business, and science, and sending them to Pandora to invade the deeply spiritual Na’vi. It is telling that of those three figureheads, it is Sigourney Weaver’s exobiologist, Grace, who ends up siding with Jake in his defection to the native people, suggesting a harmony between science and faith which purely self-interested human endeavours cannot understand.

“There’s some kind of electrochemical communication between the roots of the trees. Like the synapses between neurons. Each tree has ten to the fourth connections to the trees around it, and there are ten to the twelfth trees on Pandora … That’s more connections than the human brain. You get it? It’s a network – a global network.”

What Grace expresses as technical jargon here is something Cameron has already formally laid out formally in his world-building though, establishing the foundation upon which the entire setting of Pandora exists. On Jake’s first night stranded in the moon’s jungle, he discovers an ethereal elegance that stems from its sentient plant life, floating tiny, jellyfish-like spores through the air and settling them on his body – an auspicious sign in Na’vi culture, given that they are considered pure, sacred spirits. Even more visually astounding is the bioluminescence which lights up Pandora’s forests with a blue, green, and purple glow, not just demonstrating Cameron’s incredible talent for creating aesthetic beauty from purely digital effects, but demonstrating a greater point as well in humanity’s blindness. The artificial lights of the invaders’ machines have always drowned out this natural splendour, and it isn’t until native Neytiri puts out Jake’s fire that he can see it too, opening his eyes to the symbiotic relationship between the land and its inhabitants.

In opposition to the Na’vi, we have the RDA – a human corporation looking to rip up their gigantic ‘Hometree’ for the precious resources that lie beneath. Instead of gorgeous alien scenery, they are defined by heavy machinery and sterile, blue interiors, harshly imposing on Jake in its own bleak way. To the Na’vi, humans are simply “sky people”, inferring a race that is disconnected from the land and which positions themselves as gods looking down on those below. Their attempts to contact the native people involve assuming their form to avoid frightening them, though the journey that Jake goes on in understanding their philosophy turns the ‘avatar’ into a metaphor of a different kind.

Between Jake’s two bodies, Cameron draws a distinction between his physical and spiritual self. One is limited in its movement, the other can run, ride, and fly animals. One is bound to a confined ship, the other can form a deep connection with an entire network of organisms. When he begins to neglect the material needs of one, he nurtures the other. Inside his mind, there is an awakening taking place that positions his avatar as his authentic self, leading to his eventual confession of the feeling that “Out there is the true world, and in here is the dream.” It is this duality that is the core tenet of so many tribal religions across the world, though in taking pieces of these and remixing them into alien culture, Cameron develops a philosophy that feels both rooted in familiar traditions and entirely unique to the ecological quirks of Pandora.

Chief among these idiosyncrasies is the neural queue shared by many organisms in the moon’s ecosystems, enabling intimate connections that vary from psychic to sexual. Beneath the Tree of Souls where Jake and Neytira join their queues as an expression of love, Cameron drapes them in its glowing vines, shedding a delicate blue and purple light upon this significant development in Jake’s journey to enlightenment. At another milestone where he learns to bond with a flying banshee via his queue, Cameron brings another display of immense visual style in an even grander set piece – the jaw-dropping Floating Mountains, hanging suspended in the atmosphere with waterfalls cascading into the sky below. Much like the wondrous helicopter shots that fly across New Zealand’s glaciers and fields in The Lord of the Rings, Cameron’s cinematography expresses its own visual wonder at the impossible scenery, instilling in us a transcendent awe at every step of Jake’s transformative pilgrimage.

With so much time spent immersed in Na’vi culture, the RDA’s destruction of Hometree feels all the more devastating, rendered as an apocalyptic disaster akin to the sinking of the Titanic. Not since we have been inside the human spaceship have we seen a palette so washed out as the aftermath, settling white ash across the burnt ground and leeching all colour from the once-vibrant jungle. Alongside the Na’vi retaliation though comes a resounding pay-off to their universalist philosophy, seeing Pandora itself come alive through the natural instincts of its native fauna uniting to defend its ecosystem – much like, as Grace might put it, a giant biological system activating its immune response.

Transposing familiar stories onto exciting new settings has always been Cameron’s strength, crafting classical redemption arcs, sweeping romances, and clashes of good and evil against spectacular canvases, and although Avatar may not be his most consistently flawless work, it is certainly at least his most purely ambitious. Such immense artistic aspiration is rare among directors with as large an interest in technological capabilities as him, but it is in his use of digital effects to create bold entertainment alongside rich, allegorical artistry that he fully realises its immense artistic potential more than any other working filmmaker.

Avatar is currently streaming on Disney Plus, and is available to buy on iTunes, YouTube, and Amazon Video.