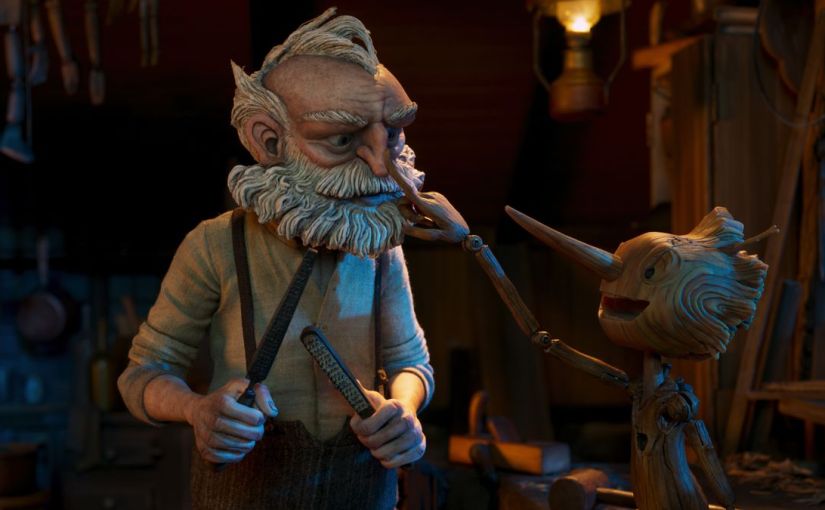 It is no surprise that Guillermo del Toro’s take on Pinocchio is a darkly tragic reframing of the original fable, adding the boy puppet to his collection of sympathetic monsters he has amassed throughout his career. Nor is it uncharacteristic of him to choose a wartime backdrop for this thoughtful consideration of oppressive fathers and approval-seeking sons, given the similar settings used in Pan’s Labyrinth and The Shape of Water. What is truly astounding is just how morbidly existential this interpretation is, even by his own standards, separating Pinocchio’s desire to become ‘real’ from Disney’s metaphor of sharpening one’s moral judgement, and instead attaching it to his gradual acceptance a limited, mortal life.

Del Toro’s foray into stop-motion animation is also perfectly suited this allegory of marionettes and blind followers, not just literalising Pinocchio as an actual puppet, but every other character in this story as well. Almost all of them are serving masters of some kind, driven into their arms by the senseless violence of World War I, and it is only by untethering themselves from those cruel leaders and willingly facing up to the world’s dangers on their own that they are able to transcend their own nature as mere puppets.

It is apparent simply from these creative visuals that Pinocchio is a passion project for del Toro. This is a director who has frequently invented his own fairy tales throughout his career, and yet it is only for the first time here that he is going straight to the source of his interests with a direct adaptation. This renewed focus allows him to dig even deeper into mythological archetypes of ancient Greece than ever before, as he sets Pinocchio out on an epic odyssey across fascist Italy and its surrounding waters. In place of sirens, there is Count Volpe’s promise of fame with his travelling theatre. Legendary sea monsters Scylla and Charybdis become the monstrous Dogfish, eating whatever creatures are unfortunate enough to pass by it. Even Mussolini makes a cameo as a godlike dictator, aiming bullets at a defiant Pinocchio where Zeus might have thrown lightning bolts.

The most existentially concerning of all the obstacles encountered through the film though is the eerie underworld guarded by Death, taking the form of a Chimera. The sentience granted to Pinocchio by her sister, the angelic Wood Sprite, did not make him fully mortal, and so while he cannot properly pass into the afterlife, each visit to this uncanny limbo will be longer than the last. Tilda Swinton does well in lending an authoritative voice to both these supernatural creatures, laying out the greatest stakes of all to this boy as he slowly comes to terms with the curse of immortality.

Filling out the rest of this immensely talented voice casts is David Bradley, Christoph Waltz, Ron Perlman, and Cate Blanchett, though it is Ewan McGregor’s turn as Sebastian J. Cricket that stands out among them, giving Pinocchio’s insectile conscience a pompous Scottish brogue. The home he makes in a pine tree destined to be chopped down and turned into a marionette positions him right where the boy’s heart would be, though rather than becoming an objective voice of reason, he too is given his own emotional development in learning the virtue of selfless generosity.

In fact, del Toro spends a commendable amount of time building out resonant arcs through many of his supporting characters, frequently embodying one of two archetypal journeys – fathers learning to accept their sons, and sons learning to live without their father’s approval. Along the line of the former, Geppetto is given his own heartbreaking backstory that frames his parenting of Pinocchio as a second chance, though one which he approaches with shame and uncertainty. Along the latter, del Toro offers immensely rich characterisations to smaller parts such as Spazzatura, Count Volpe’s monkey assistant, and Candlewick, the son of a fascist government official, both of whom move past their initial rivalries with Pinocchio and find a likeness in their struggles for acceptance. On a broader scale, the constant patriarchal talk of serving the ‘Fatherland’ places these individual stories in a very specific political context, offering those who do as they are told false assurances that they will find fulfilment in their duty.

The historical detail that del Toro painstakingly imbues in his world is only outdone by the vivid tactility of its aesthetic design, carving deep indentations into every distinctive character feature from Geppetto’s tufty beard to Pinocchio’s wood grain. With so much attention poured into the rough cracks and worn edges of his figurines, perhaps there is some power lacking in his visual compositions, seldom possessing the sort of carefully staged arrangements present in his greatest works. Neither does Alexandre Desplat’s score inspire the same sentimental evocations as his previous collaboration with del Toro, The Shape of Water, which is especially disappointing given the movie-musical format.

Still, there is no arguing against the meticulous artistry of del Toro’s animation, carrying all the trademarks of his distinctive style over into an entirely new medium, while pushing it even further with some brilliantly inventive designs. Quite remarkably, he expresses an incredible amount of personality and emotion through these figurines, resonating Geppetto’s “terrible, terrible joy” across each character who ends up finding both value and sorrow in parenthood, independence, and mortality. It is ultimately only by moving past their immature, self-preserving instincts that any of them, whether human, animal, or puppet, discover what it really means to be “real.”

Pinocchio is currently streaming on Netflix.