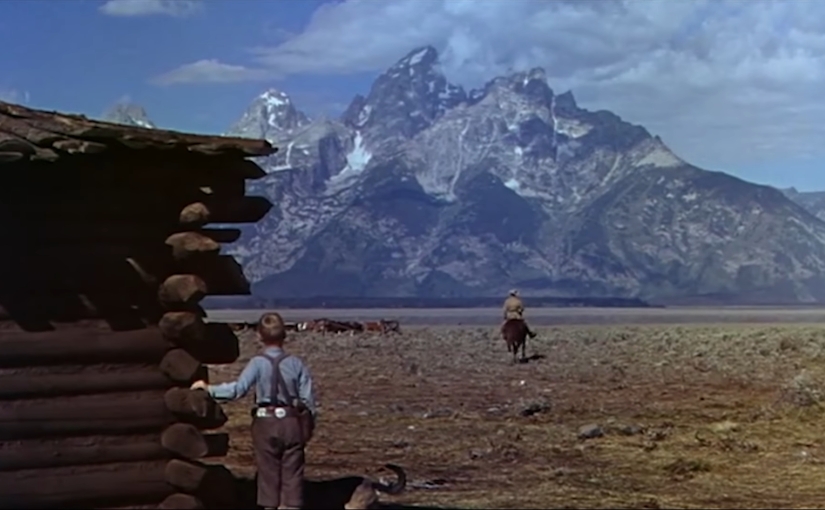 Shane is recognised so widely as the western that launched a thousand genre conventions, it is easy to forget how much of it takes the form of a 1950s melodrama. The threat of the cattle baron is only really secondary to the central story here of a mysterious man emerging from the Wyoming mountains and changing a family for the better, affecting each member in different ways. George Stevens’ blocking of his actors is integral to these relations, offering layers of subtext and revealing their unspoken feelings. There always seems to be interactions going on between the foreground and background, Stevens using the direction of their eye lines to indicate where their attentions lie, in spite of, or in conjunction with, their physical distance. Shane and the Starrett family are also always being trapped within all kinds of frames – windows, doorways, fence posts, broken slats on saloon doors, even the legs of a horse. Even though they live in this vast, open landscape, their surroundings are visually closing in around them.

The family dynamic is efficiently set up in the choreographed movement of the opening scenes. Joe Starrett is a man who feels shame in his powerless to protect his family against an indomitable threat. His wife, Marian, loves him dearly but can’t access the same emotional connection they used to have. Their son, Joey, remains oblivious to the serious stakes at play, but the respect he has for his father is gradually eroding.

In introducing Shane as the catalyst right away, we immediately see how these dynamics start to shift. He offers them the protection that Joe can’t provide, bringing with him a strength that Joey admires and a sturdiness Marian might even desire sexually. During the community dance scene, Shane and Marian engage in what should be an innocent interaction, but the closeness of their bodies captured in the background while Joe watches them in the foreground from behind a fence visually demonstrates the silent love triangle emerging. Though they are drawn to him, we see restraint and inaccessibility in Alan Ladd’s performance, indicating a lack of emotional support that only Joe can offer. Rather than leaving Joe on the sidelines, Shane bolsters his confidence, thereby giving him the opportunity to win his family’s respect back.

Joe is no fool though. He understands the connection growing between Marian and Shane, but he isn’t angry or bitter. His first priority is that his family is safe and happy, and he sees Shane as a sort of backup plan if he himself were to die.

Meanwhile, there is strong metaphorical undercurrent of guns that runs through the film. During Shane’s fights and shootouts with the villains, Stevens keeps cutting back to close-ups of Joey looking on in awe, admiring the sheer physical power and violence that the heroic gunman projects. Shane even offers to teach him a few tricks, but Marian is rightfully worried. After all, who is to say that when Joey is an adult he will use his guns for purposes as noble as Shane’s? There is constant tension between his philosophy that a gun is simply a tool “as good or as bad as the man using it”, and Marian’s desire for there to be not “a single gun in the valley”. Neither are wrong. His skill with pistols certainly put a stop to the villains and their firearms, but what’s even better than a good guy with a gun is no guns at all.

Shane isn’t easily separated from them though. Violence is such a significant part of his past, it has infected his conscience with guilt and anger. He is an outsider in this valley, which is a haven for more civilised folk. Stevens keeps framing the breathtaking Wyoming mountains in the background as a reminder of where both Shane and Ryker, the cattle baron, first emerged from – a rougher terrain, and an older era where disagreements were settled with violence. Shane is familiar with men like Ryker, and knows how to deal with them. There is never really much doubt whether he will ultimately win out in that arena. What Stevens invests us in is whether he can deal with them and still live a normal life.

Shane realises that is impossible though. The mere fact he so easily bests Ryker and his henchmen in every confrontation tells us that he is no stranger to murder. It is likely he may have even done bad things in his past, as Stevens just keeps painting out the parallels between the two of them. In the end, what distinguishes them is how they decide to use their power in this moment, with Shane choosing to defend the vulnerable. He also realises though that in the act of killing someone, there is little chance for redemption. Though Joe vehemently desires to take on Ryker himself and protect his family, Shane holds him back. Not just because he is worried that he might get himself killed, but because even he were successful he would become a “gun” like Shane, and thus unfit to build his family a nonviolent, prosperous future.

“No guns in the valley”, Shane recalls after winning the climactic shootout. Neither he nor Ryker belong in this valley, and now that Ryker is gone, so is Shane’s purpose for staying behind. Ryker was bitter that younger families were living off the land that he tamed, but Shane recognises that pioneers belong to the past. This new civilisation is one that requires stability, cooperation, and growth – what else was it that the pioneers were building towards anyway? All he can do now is return to the mountains that he came from, bookending the film with a mysterious entrance and exit.

Superhero movies owe a lot to Stevens, as the central theses for so many have emerged from Shane’s own struggle between power and peace. It isn’t without its flaws, since Brandon deWilde’s “gee whiz” performance as Joey Starrett is more than a little forced. But even he delivers in the moments that matter, including the closing scene where he calls after Shane as he heads out of the valley. Regardless of where deWilde’s performance lands, it is only minor compared to George Stevens’ masterful blocking of his actors against open landscapes and confined frames, bringing layers of cinematic excellence to an already outstanding screenplay.

Shane is available to rent or buy on iTunes, YouTube, Google Play, and Amazon Prime Video.