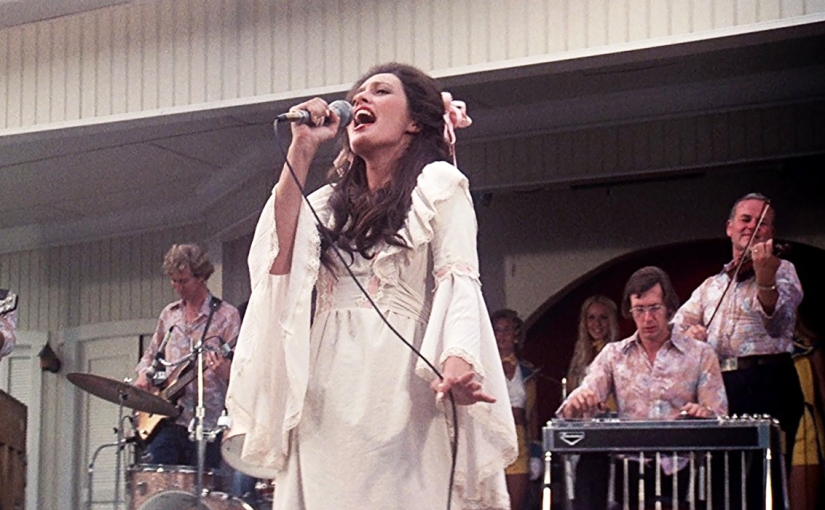 It is difficult to think of a film as organically structured as Nashville, with its gentle progression from one narrative thread to the next carrying the impression that Robert Altman could point his camera in any direction and still find just as equally fascinating characters as those who make up his main ensemble. On the surface, the only thing that these people might have in common is their connection to the city’s country music scene, though as each storyline is teased out and interwoven around others, we discover a unifying motivation emerge in each of them – a simple yearning for recognition, whether through fame, respect, or love.

The concept of sprawling narratives that follow concurrent plot threads between large groups of strangers was still in its relative infancy in 1975, as it wouldn’t be until a few decades later that it would be dubbed hyperlink cinema, with the impact of the World Wide Web extending our understanding of lives beyond our own. Not only is Altman’s interpretation of this narrative structure fully matured before its rise in popularity, it also makes for a perfect fit for his own style of filmmaking, where the individual lines of dialogue matter less than the impression they collectively form in overlapping others. We can choose which conversation to listen to at any time, and his camera zooms often helps us in this decision as it pans through crowds and pushes in on individuals to pick out some above the others, but it is more often the holistic blend that gives each scene its own unique acoustic texture.

The impression we quite frequently get from this is chaos, though never to the extent that we doubt Altman’s loss of control. It hits us right from the first few seconds when a radio announcer begins reading out the opening credits over the top of several country songs fading in and out, mimicking the sound of a radio flicking through stations, each one a taste of what is to come. And true to its musical commitment, Nashville affords us the time to listen to each of these country music pieces in full, at times leading from one right into another like a concert. Not one to micromanage his cast, Altman let many of them write their own songs, allowing an authenticity into their performances that turns each number into a natural extension of their characters.

The most prominent of these country ditties is one that is formally repeated several times through the film, until it becomes an anthem for the city itself. “It Don’t Worry Me” is an assertion of freedom and the right to stay cool in the face of adversity, sung as a gentle reassurance in quieter moments, and every so often marking a significant disaster. Its first appearance follows a car pileup on the highway that we can assume almost certainly results in serious injuries, though as it plays in the background our attention remains on those who are only tangentially affected by the incident. BBC journalist Opal uses it as an opportunity to interview locals, in search for a decent story. Kenny Frasier, a mysterious traveller carrying a violin case, hitches a ride with Star, whose wife, Winifred, has taken the chance to run off, resolved to pursue her singing ambitions. All through the film, there is a pattern of unifying events like this, frequently bringing characters together in concerts, church services, and unexpected disruptions. It is within them that Altman’s editing is at its most finely balanced, relishing the interconnectedness of each individual narrative thread.

Perhaps the most fascinating part of seeing these characters evolve through shared experiences is realising how much these incidents take on separate meanings within each story. When Tom vaguely dedicates his song “I’m Easy” to “someone who might just be here tonight,” L.A. Joan, Mary, and Opal quietly smile to themselves, teasing the notion that it could very well be them. For gospel singer Linnea, who has been slightly more resistant to his charms, it becomes a sensual seduction. As she sits at the back of the audience, Altman slowly zooms into her mesmerised gaze of guilt, disbelief, and adoration, picking her story out above everyone else’s as the one worth paying attention to.

And compared to the rest of this wild ensemble of musicians and super fans, Linnea may be our most quietly grounding force. In the case of Sueleen, a humble waitress with a terrible voice, it is crushing to see her degrading humiliation in a room of chauvinistic men, who force her to strip when her singing proves unsatisfactory. In Barbara Jean, who represents the sort of musical success that so many other characters aspire to, we observe the pressures of fame crack open that charming sweetheart image she has spent years cultivating. The celebrity worship culture that pervades Nashville projects an idealism that almost every character is blinded by on some level, and through his ensemble cast Altman comes at it from several angles, trying to get at the social problems it smoothly glosses over.

Perhaps then we might find some sense of reality in the disembodied voice of presidential hopeful Hal Phillip Walker that echoes through the streets from a campaign van, although even his politics appear to be defined by the same populist appeal as that which underlies Nashville’s music scene. He promises a vague sort of change and throws out catchy slogans, but not once in the film does he make a physical appearance. As such, he might as well stand in for the city itself in all its cultural idealism.

His fundraising gala concert thus sets the perfect scene for Nashville’s epic finale, whereby each storyline arrives at a single location to find their resolution. Though we have followed the mysterious Kenny since the start, it is still a complete unknown as to why he chooses to shoot Barbara Jean. Perhaps he is seeking his own sort of fame, or maybe he harbours resentment towards the culture she represents. But Nashville is not the place to investigate why such bad things happen. The focus must always be on the aftermath. Not just in the rebuilding of this community, but in recognising how each affected individual in some way finds their own meaning in the tragedy.

There is an amusing irony that the last time we see the story-seeking journalist Opal she is asking around about what just happened, having missed the incident entirely. Meanwhile, Barbara Jean fan Pfc. Glenn Kelly is the first to disarm the shooter, Sueleen is fortunately denied the opportunity to embarrass herself again, and country superstar Haven quells the disturbance in the crowd, angrily affirming that “This isn’t Dallas!” In this sly reference to the assassination of JFK, still fresh in the minds of these Americans, there is also a reluctant acknowledgement of political woes existing out there in the world. But of course, Nashville is a city of music, and any politics that makes its way in must be filtered through its culture of bright idealism.

Within the chaos, it is Winifred who somehow ends up with the microphone and is told to calm the crowd, fate finding its way into her arc just as it does the others. Perhaps if we had heard her sing earlier in the film, we might have been able to guess that she would become the new Barbara Jean. In holding out until these final minutes to take on the final rendition of “It Don’t Worry Me” though, the song arrives in its entirety for the first time with both a fresh revelation and a biting indictment, cheerily underscoring the revolving door of celebrities that has now revealed a new idol to replace the one who died just mere minutes ago. Altman doesn’t cast heavy aspersions here, but whether we read this uniquely Nashvillian brand of optimism as the bedrock of a thriving community or a mass delusion, it still remains a powerful force of culture-defining magnitude in this sprawling city.

Nashville is currently available to rent on iTunes, or to buy on iTunes, YouTube, Google Play, Amazon Video.