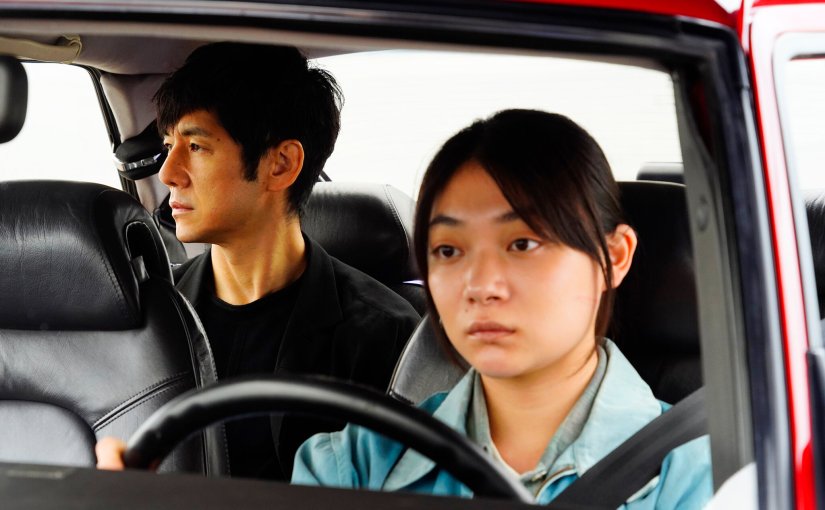 In this story of terrible grief and long journeys of healing, Ryusuke Hamaguchi realises the need to take his time, for both himself and his characters. Perhaps there is a tighter, leaner version of Drive My Car out there than the three-hour version he presents us with, but that would simply not do justice to the complex figures at its heart, or their gentle processes of discovery – discovering oneself, discovering the true nature of those who have left us, and discovering others who share the same pain. In teasing out the mannerisms, insecurities, and quiet longings of his characters over such a lengthy period, an impression slowly forms of time being an unlimited resource to these men and women who have seen loved ones pass on, leaving them in a tranquil limbo of endless self-reflection.

Given its foundation within a Haruki Murakami short story of the same name, the compelling, elusive characters that make up the cast of Drive My Car are almost a given, though Hamaguchi’s collaboration with Takamasa Oe on this screenplay isn’t simply coasting by on its rich source material. This is a text just as much in tune with its dramaturgical influences as it is with its literary, centring widowed actor Yüsuke Kafuku as an artist with a sensitive love of the theatre, ranging from the absurdism of Samuel Beckett to the realism of Anton Chekhov.

For much of his married life, this artistic devotion has also rested precariously on his wife’s passion for scriptwriting. In an extended forty-minute prologue preceding the opening credits, Hamaguchi teases out their loving but difficult relationship, opening up many questions that we don’t find answers to until the final act of the film. During sex, she will often instinctively find the spark of inspiration to narrate a story, which he will then memorise and relay back to her the next day. For her, sex and stories are not only connected, but are necessary to healing the wounds left behind by their young daughter’s death many years ago. Loss has plagued Yüsuke’s life, and now without Oto by his side, it is not so easy anymore to find that wonder in the act of creation.

It is when we leap to two years later that the meaning of the film’s title finally emerges, as Yüsuke is hired to direct the play Uncle Vanya in Hiroshima on the condition that he is chauffeured in his own car by young driver Watari. It is within this vehicle that Hamaguchi crafts some of the most touching scenes of the film, elegantly underlining the trust that forms between the two. Though initially reluctant to hand his keys over, Yüsuke’s submission gradually becomes a silent acknowledgement of his own powerlessness, while Watari indirectly takes charge. Now whenever Yüsuke rehearses his lines against the tape recorded by Oto before her death, he must first ask Watari to play it, implicitly involving her in the process. She doesn’t ask questions to begin with, and he similarly keeps a distance between them in sitting in the back. But over time as their emotional barriers break down, he moves to the front seat and she begins to probe deeper. Conversely, he starts to learn more about her as well, and their relationship turns into one of equals, both eager to share and listen.

The formal construction of this screenplay must be praised, as it is within these car trips and the many theatre plays we glimpse throughout the film that Hamaguchi moves us into a meditative state, considering the profound sorrow of these characters. Perhaps the greatest flaw to be found here is in Hamaguchi’s resistance to offering an equally arresting aesthetic to their emotional journeys, opting instead for a regrettably plain style of shooting which fails to mesmerise us in the same way. Certainly those few splashes of visual style are worth appreciating when they appear, the very first shot of the film being one such moment where Oto’s naked silhouette imprints against a soft sunrise as she begins to tell a story. Another sequence worth noting is a moment of bonding between Yüsuke and Watari after a particularly therapeutic car conversation, both their hands rising up out the sunroof, holding cigarettes in the night breeze. But with such sparseness in this indelible imagery, Hamaguchi offers little cinematically to his particularly lengthy film.

Ultimately, Drive My Car is a far greater achievement in writing than it is in direction, so it is quite impressive that Hamaguchi is still able to hold our attention for so long without demonstrating a particularly active interest behind the camera. As we discover the vulnerability that lies in mysterious characters who we might have initially deemed unknowable, the film once again returns to a theatre play that speaks for their troubles in its final minutes.

In the multi-lingual production of Uncle Vanya that Yüsuke is directing and now performing in, one cast member communicates in Korean sign language, and as she delivers her closing monologue, she stands behind him, signing for both of them. “We live through the long days and the long nights. We patiently endure the trials that fate sends our way,” she tells us. Just as becoming a passenger in his own car has taught him the power in letting others take the wheel on his journey to recovery, so too does he now go forward with renewed humility, recognising how the emotional expressions and stories of others may cut to something deep within himself.

Drive My Car is current playing in theatres.