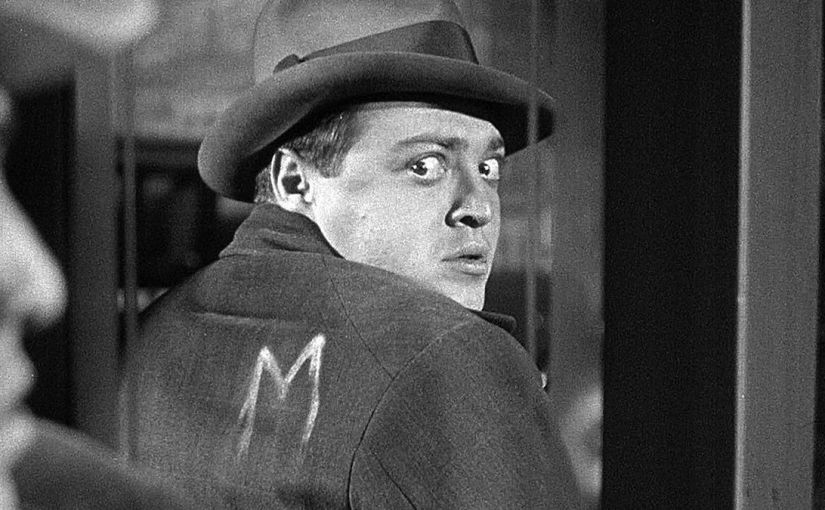 It may be somewhat surprising to our modern sensibilities that M was such a controversial film upon its release, especially given its colossal influence on almost everything we watch today from police procedurals to crime movies. It isn’t its bluntness that makes it such a provocative film though, but rather its masterful use of subtext and signifiers to understand the mind of a reprehensible child killer. From the opening minutes where we watch the shadow of Peter Lorre’s profile slide across a wanted poster, to the simple image of a balloon floating into some power lines to mark the death of a child – Beckert’s crimes are conveyed through progressions of images and musical motifs that show us everything but his actual murders and, for its entire first act, his face.

This is only one half of the story though. The other follows the police and crime rings tracking down the mysterious child killer for their own purposes, interrogating suspects and using a network of homeless beggars to keep an eye on the children of the city. The parallels between the law officers and criminals are closely drawn – both conspire in dark, dingy rooms about round tables, each possessing their own special abilities to achieve their goals. For once in their lives, they have a common target that unites them. That Beckert has made enemies of even the worst criminals paints him out as an abomination on a whole new level of depravity.

Fritz Lang’s camera is always finding reflections in glass windows and frames in the tight spaces between city buildings, archways, and even people. The crowds of the city are prone to hysteria when they believe they have found the culprit, but they are also capable of great cooperation when they put their minds to singular tasks. Without knowing his crimes, to them Beckert appears to be just another innocent citizen. But thanks to Lang’s framing of his short, dumpy figure, Beckert stands out to us. He doesn’t strike an intimidating figure, but in his bulging wide eyes and switch blade that suggests sexual arousal, Peter Lorre exudes revulsion. This isn’t a man who embodies murder in his very being, but rather an ordinary person who has let his most twisted desires get the better of him. When he realises he has been branded by an M, he panics. He can easily shed the marked coat, but the mere realisation that someone else has recognised the evil in him is the harshest damnation.

Once he has been dragged into the unofficial courtroom, we keep seeing hands and arms reaching into the frame to grab Beckert by the shoulder, as if to accusingly catch him out over and over again. He is surrounded, and completely helpless. At his lowest and most vulnerable, he delivers an impassioned speech – but not the kind we were expecting from a man like this.

“Always, always I have to roam the streets and I always sense that someone is following me. It is me! And I shadow myself! Silently, yet I still hear it. Sometimes I feel like I’m hunting myself down. I want to run, run away for me. But I can’t! I can’t flee from myself! Must take the oath that it’s urging me on and run. I want off! I want off . . . Who knows what’s inside me? How it cries and screams inside when I have to do it.”

It isn’t quite sympathy we feel for him, but rather pity for his own weaknesses. The visual threads that tether M back to the era of silent cinema are clear in the sped-up montages and expressionist images, but its use of sound, both in the whistling motif and in the payoff of Lorre’s final monologue, is also monumental in the history of film. It is certainly a highlight of both Lang’s and Lorre’s careers, but M is also disturbing in how it hints at a manipulative darkness in Germany a mere few years before the rise of the Nazi party.