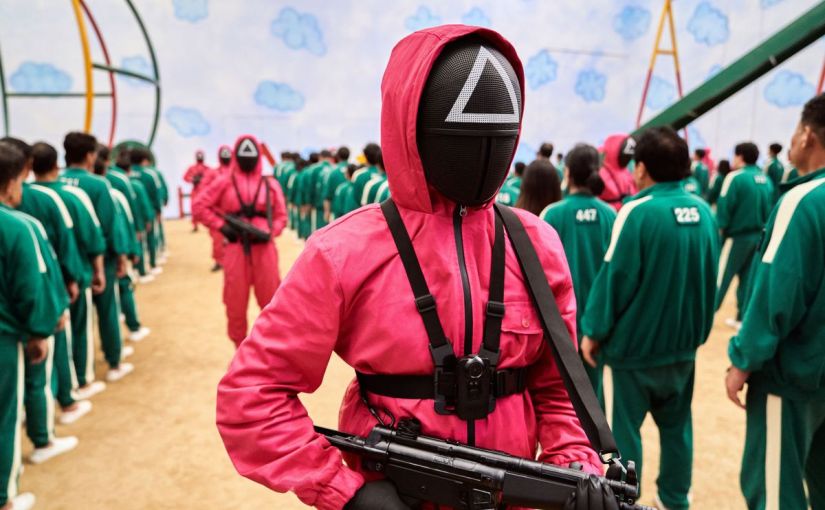 In the seemingly never-ending flow of Netflix content that shines brightly in the public consciousness for a good few weeks before disappearing again into obscurity (Bird Box anyone?), there are few series that carry some level of artistic bravura to back it up, or which are as in conversation with the modern cinematic landscape as Squid Game. Hwang Dong-hyuk rides the cultural excitement of the Korean New Wave that in recent years saw the elevation of such directors as Park Chan-wook (Oldboy), Lee Chang-dong (Burning), and most famously Bong Joon-ho (Parasite), attacking similar notions of class inequality with a sharp and particularly bloody knife. Men and women violently fighting it out in controlled arenas to win some prize is not a wholly original concept, but in breaking it up into six separate childhood games with deadly twists, Hwang adds a modicum of innocence into each thrilling set piece, and then shatters it with the cruel barbarism of late stage capitalism, splitting its players into two camps – the wealthy and the dead.

The candy-coloured palette of the mysterious fortress within which these 456 impoverished players sleep and compete is deceptively innocuous, lulling each of them into a false sense of security as they traverse a labyrinth of pastel pink, blue, and green stairs on their way to the first game, and the classical waltz of Strauss’ ‘The Blue Danube’ plays over speakers. Dressed in teal jumpsuits and kept under control by pink-uniformed guards in black masks, they are all too happy to ignore the multiple red flags along the way, especially given the promise of money for those who remain in the competition until the end. And even when that first death hits and the stakes are revealed, that temptation of riches still continues to pull them forward, manifesting as a giant golden orb filled with growing piles of cash that hangs above their beds and lights up the room as they sleep, an ever-present reminder of a better life that awaits them on the other side.

One of the most haunting episodes in this series is a quieter one early on, in which these players are offered the opportunity to return to their difficult lives back home, though eventually decide that the likely chance of dying is a better alternative. There is no violent set piece in this episode, but the weighty drama and debate which Hwang skilfully draws out between these diverse characters even beyond the arena offers them a great deal of empathy. Having realised of their own accord the opportunity that the games may provide them, they individually stand on street kerbs waiting to be ferried back, and Hwang binds them together in a poignant montage recognising their devastating lack of options.

From this point on, the characters of Squid Game begin to develop their own alliances and strategies with renewed focus and perspective. Though the mysterious organisation behind it all are clearly responsible for this situation, this is also a perfectly designed environment for its wealthy members to remain untouched, as the competition between these players allows them to channel their anger towards each other instead. Hwang’s metaphor isn’t always subtle, but it is at least potent, with one major exception being in episode 7 where foreign VIPs arrive to watch the games up close. A combination of poor acting and glib writing lets these scenes down quite drastically, bringing little of value to the series that wasn’t already hinted at in metaphors or tantalising mysteries. Perhaps there is a leaner version of Squid Game that doesn’t need ten episodes to tell its story, but at the same time Hwang does brilliantly in building out his characters in rich enough detail that both set pieces and quieter moments of drama are able to operate on equally gripping levels of tension, melding together to form a layered microcosm of South Korea’s capitalist society.

Squid Game is currently available to stream on Netflix.