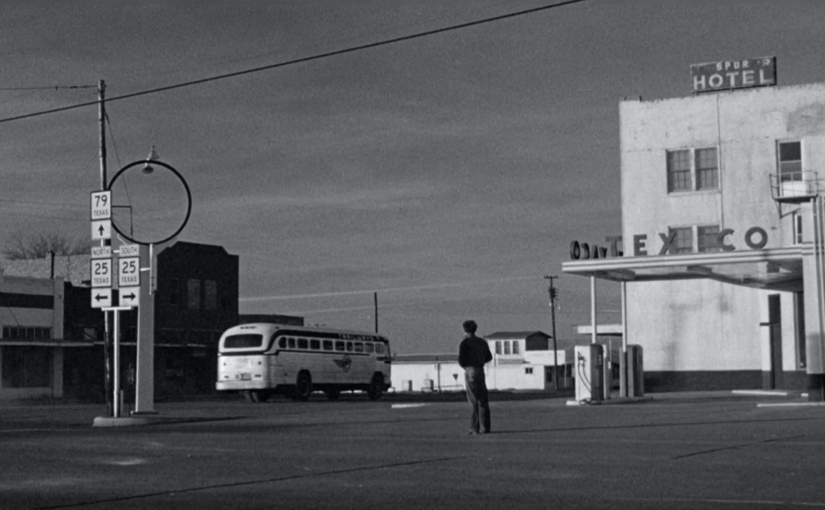 Perhaps in the days of the Old West, the tiny Texan town of Anarene may have been a bustling hub of oil mining and transportation. By the time The Last Picture Show picks up the story of teenagers Duane, Sonny, and Jacy in 1951 though, that landscape of idealistic prosperity is nothing but a sad, faded memory, whistling in the wind down the empty main road and faintly recalled in the crumbling facades of old storefronts. The adults who keep it running are an assortment of disillusioned schoolteachers, small business owners, and blue-collar workers, parenting a generation of children who have no frame of reference for anything greater. Whatever the American Dream looks like for them, it is not going to happen here.

As a film historian, Peter Bogdanovich does not so much pioneer cinema in The Last Picture Show as he does reflect on its past and the cultures it has represented. It should be no surprised that Orson Welles acted as his mentor during production, and the influence there extends far beyond the mere fact that he encouraged him to shoot in black-and-white. The deep focus photography that so beautifully captures Bogdanovich’s ensemble layered through frames in strikingly staged compositions directly calls back to Welles’ own distinct visual style, and the thick air of melancholic nostalgia that has settled over this once-glorious town at times even feels like a post-war Southern transposition of The Magnificent Ambersons. Car doors and diner blinds become frames through which we watch characters haunt these streets like wandering ghosts, drifting down lonely roads or otherwise congregating with peers to pass the time, waiting for the day they either escape this town or die in it.

For the teenagers living here, that is essentially the choice they are presented with, and the end of high school is the deadline for it to be made. Accordingly, anyone over the age of eighteen is part of the population that decided to stay, whether out of some sentimental loyalty or lack of prospects. As wonderful as the younger cast is here with Jeff Bridges, Timothy Bottoms, and Cybill Shepherd each affectingly capturing the ennui of youth, there is an even deeper poignancy to the performances from Bogdanovich’s older actors, with Cloris Leachman and Ellen Burstyn both stealing scenes as disillusioned housewives, Ruth Popper and Lois Farrow, each living inert existences. “Everything gets old if you do it long enough,” laments Lois to her daughter, Jacy, actively trying to corrupt her naïve idealism into the same tired discontent that has taken over her generation, and it is only a matter of time before she is successful.

Ben Johnson similarly has a world-weariness about him as Sam the Lion, though as the small businessman keeping the local pool, movie theatre, and café alive, he also carries a spark of the town’s old pride about him. He is stern but kind towards the local teenagers, evidently caring more about their growth than anyone else, and even spending time with them out at the “tank”, a bleak fishing spot depleted of fish. It is the flat, bleak Texan scenery which entices him there, and as he sits rolling cigarettes with Sonny and Billy, a mentally disabled neighbourhood boy, he wistfully reminisces the “old times” just twenty years ago when he took a past lover out to this same pond. Bogdanovich slowly dollies his camera in on his face, inviting us into his story of how they skinny dipped and rode horses across the water, and telling of the bright zeal for life he saw in that woman. “You wouldn’t believe how this country’s changed,” he wistfully ruminates, and given the later reveal that this woman was in fact Lois, we can infer that he is mourning the cultural shift in its people just as much as he is the physical landscape.

Cynical as she is, it isn’t hard to imagine a younger version of Lois behaving much like her coquettish daughter. Back then she might have flirted with men she wasn’t supposed to, but by the time we meet her here she is more or less representative of the adults in town, neglecting the widening emotional gap between her and her child. With little guidance from their elders, the teens of Anarene meander from one social gathering to the next, hoping to lose their virginity just for the sake of saying they have done it. All across the town, through cars and diners, Hank Williams’ twanging country vocals provides the diegetic soundtrack to their lives, matching their own lonesome struggles with bluesy musings over lovesickness and longing. Breaking this monotony does not prove to be easy though, with even sex proving to be dissatisfying and attempts to stir up controversy brewing nothing but shame.

Still, what else is there to do? We get the sense that Sonny’s affair with Ruth, the wife of his school coach, has little to do with any genuine romantic feelings, and more to do with a desire to rebel, though even when word about it gets out into the community the reaction is disappointing. Meanwhile, Jacy is on a fruitless quest for attention, strip teasing at a pool party and choosing to date whoever she thinks might make for a good story. Shepherd is simply luminous in this role, naturally drawing the eye even in crowds, and challenging our sympathies when she so thoughtlessly discards the emotions of others in favour of her own self-centredness. Much like virtually everything she does, her elopement with Sonny is nothing more than an attempt to win the attention of her parents. When she catches sight of a police car on the road to Oklahoma, a little smile appears in the corner of her mouth, grateful that she is being stopped before following through on her small rebellion.

With the death of Sam and the closing of his movie theatre, there is little hope left that this town will ever return to the glory of its old days again. Red River is the last film to play there, projecting a vision of the Old West up on the screen for the tiny audience of Duane and Sonny witnessing this part of the town’s history die out. Not long after, the two friends part ways, their decisions made regarding whether they will continue to haunt this limbo or make their way into the larger world beyond its borders. Given that the Korean War is Duane’s destination, it is tough to say whether he will find the meaning in his life that he is searching for. Still, at least it is a change of pace from Anarene’s dreariness, growing even more mundane with each passing generation.

In the end, Bogdanovich leaves us exactly where he picked us up at the start – stranded on the dusty, windy streets, panning across its desolate infrastructure as if searching for some lingering sign of life. It might be a barren beauty which infests The Last Picture Show, but as we grow to understand the small lives and histories dotted through its community, Bogdanovich also sensitively paints it out as a tactile landscape of feeble dreams and disappointments.

The Last Picture Show is currently streaming on The Criterion Channel, and is available to rent or buy on iTunes, Google Play, and Amazon Video.