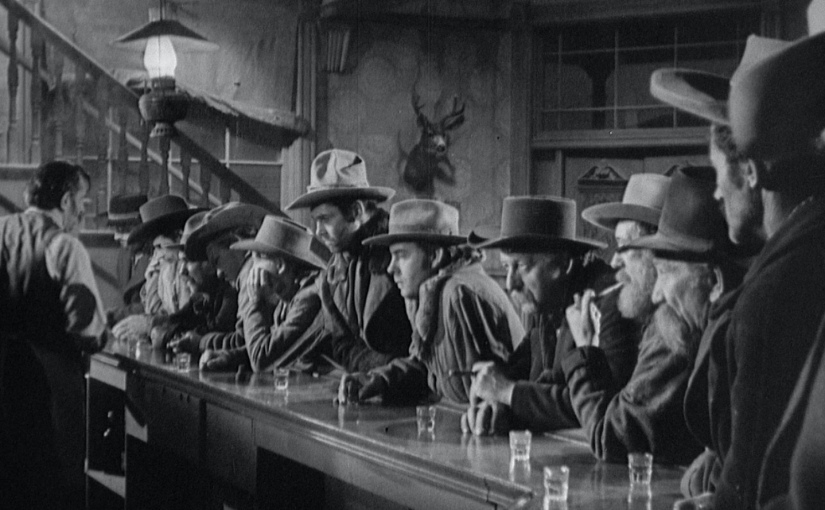 It is a very lean 75 minutes that The Ox-Bow Incident plays out over, using the western genre as a simple framework for a self-contained moral tale warning against mob mentality. Though the artificial soundstage is obvious at times, the film is never visually flat. Much of this is thanks to William A. Wellman’s compositions of actors’ bodies, many of which are worthy of Kurosawa comparisons in their beauty, and which are made all the more impressive by the size of the ensemble he is working with.

When the small western town of Bridger’s Wells gets news of an outlaw gang killing a local rancher, the men of the community quickly form a posse hellbent on seeking vengeance for their neighbour. Caught up in the company are two travellers resisting the rancorous rage around them, one of whom is portrayed by a very well-cast Henry Fonda playing right into his kind, intelligent screen persona.

Meanwhile, the rest of the ensemble is filled out by supporting and minor characters with their own motivations for retribution. While some are blinded by their own self-righteousness, others simply take delight in the prospect of violence, with one man specifically repeating the same grotesque hanging gesture as he cackles wildly to himself. The suspects can do nothing but plead their case, gradually growing more irritated with the posse’s hypocrisy.

“What do you care about justice? You don’t even care whether you’ve got the right men or not! All you know is you’ve lost something and somebody’s got to be punished!”

Wellman continues to layer his shots with strong attention to the character relationships all throughout, binding the accused men together in small spaces then surrounding and dwarfing them by the violent mob. His blocking most effectively works its way into the narrative when the posse take a vote on the captives’ fate, during which seven men stand together in a lonely but empowering low angle, while a reverse shot pans across the furious eyes of the company staring right down the barrel of the camera. The Ox-Bow Incident may be a simple, short morality play, but there is a lot to say about the empathy that Wellman brings to this narrative purely through his thoughtful staging.

The Ox-Bow Incident is not currently available to stream in Australia.