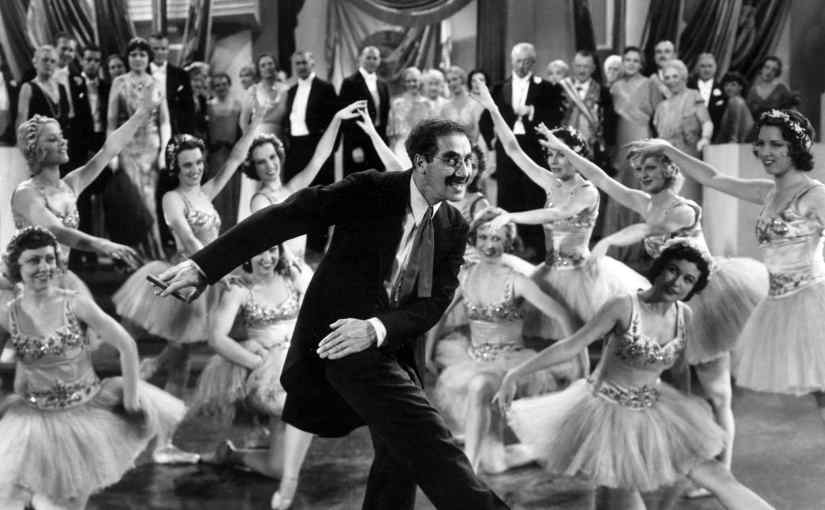 If there was ever a serious challenger to auteur theory, it would be the collective group of the Marx Brothers. Leo McCarey is a decent director, and certainly brings a good eye for symmetry to some of Duck Soup’s ensemble musical numbers, but there’s no mistaking the mark of the Marx’s. Rapid-fire gags, tightly coordinated slapstick, subtle witticisms that undercut authority – this is 1930s comedy at its most zany and brutally eviscerating.

Whether one finds this sort of humour funny or not is a matter of taste. Though I have softened towards the Marx Brothers over time, I still don’t find myself laughing at every joke. Some physical gags run for longer than necessary, and bring everything else to a grinding halt. But it’s hard not to admire the go-for-broke commitment with which they attack every single quip.

Groucho, Chico, and Harpo’s characters are agents of chaos with streaks of blatant incompetence, and yet they are tasked with responsibilities of national significance. Rufus T. Firefly is appointed leader of Freedonia, “land of the brave and free” as its citizens proudly proclaim in their vague, generic national anthem. He announces upfront how terrible a leader he will be, but his followers celebrate him regardless, dancing along to his jaunty tune. All three of the brothers are easily distracted, going off on comedic tangents that incidentally make the high stakes of the narrative secondary to whatever has caught their immediate attention.

Firefly is a man of pettiness and great ego, riling himself up over a perceived insult from a foreign leader that never occurred, and thereby declaring a completely avoidable and unnecessary war. In a bombastically patriotic musical number, the rest of Freedonia is brought down to his level in their excitement for the coming conflict, falling on their backs and kicking their legs in the air like children. The chaotic absurdity of the Marx Brothers is infectious, and no one in Freedonia is immune to the hysteria they whip up.

In the thick of battle, Firefly doesn’t distinguish between ally and foe, shooting happily at whoever is unfortunate enough to get in his way. While his soldiers die on the frontlines, the madman stays up in his tower, pulling down blinds as if that will stop the bombs flying through. There might be better comedic sequences elsewhere in the film, but this final act is where the full weight of the political satire sets in. This war doesn’t end with one side winning over the other, but with Firefly capturing his foe in battle and pegging fruit at him. By applying their knack for satire to the incompetent, narcissistic political leaders of the western world, the Marx Brothers ultimately hit on comedy gold and deliver perhaps the best work of their careers.

Duck Soup is available to rent or buy on iTunes and YouTube.