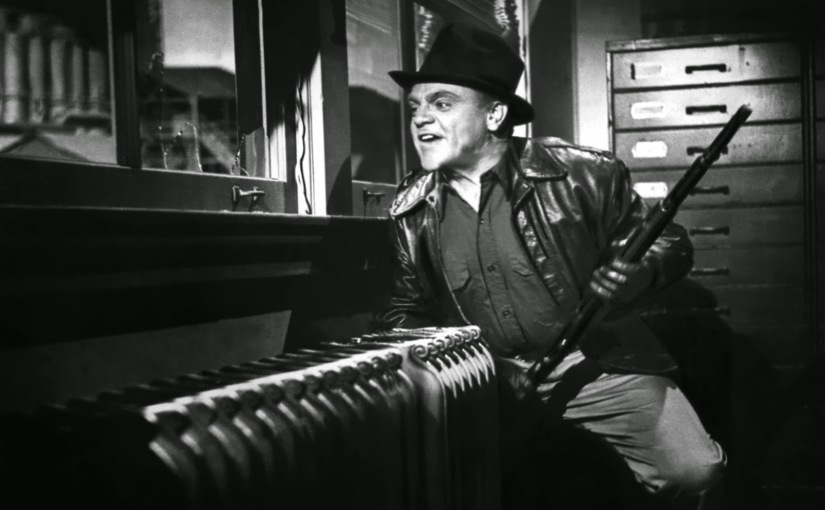 Before there was Norman Bates and his psychotic mother, there was Cody and Ma Jarrett – two halves of one criminal mind, operating illegal schemes from within their small mob and sharing a co-dependent love which stretches our belief in its platonic foundations. Though Cody is married to the wily, blonde Verna and places full trust in his right-hand man, Big Ed, both associates recognise that their respective relationships with him will never approach the same depths as this mother-son bond, which holds sway over virtually every aspect of his life. Perhaps more than anything else, it is this stunted maturity which erodes their faith in him, pushing them to eliminate Ma when her back is turned and thereby robbing him of his greatest source of comfort. The law’s concerted efforts to track him down may be directly responsible for Cody’s eventual downfall, but it is only when Ma is finally out of the picture that he finds himself truly defeated.

Not that Cody would ever admit that. He’s on his way to the “Top of the world,” according to his Ma, and her early death only sees him cling closer to that idea than ever. White Heat might almost be a tragedy if its central character was not such a despicable human being, though with an actor like James Cagney in this role commanding a heavy, magnetic screen presence, Cody begs for at least some of the audience’s pity. With a jaw that juts out from a scowling face and the physique of a stocky brawler, Cagney’s gangster looks like a tougher, more violent take on the classic Wellesian antihero, not unlike Charles Foster Kane in his great ambition, or George Amberson Minafer in his Freudian inclinations. For Cody, it is not one fatal flaw earning his place among the greatest cinematic characters of the 1940s, but a whole multitude of them, each one tied back to that insecure, volatile ego which places his mother on a pedestal and punishes anyone who even hints at threatening their unhinged relationship.

Raoul Walsh’s slick direction is well-suited to the abundant subtext of this twisted dynamic, blocking his actors in compositions that insulate Cody and Ma in their own lonely world, and later blending close-ups of both their faces in a well-timed long dissolve. This childlike bond brings a surprising layer of vulnerability to an otherwise harsh character, especially when Cody finds himself dolefully separated from his Ma in prison. The scene in which he learns of her death from his fellow inmates was originally going to take place in a small chapel due to the cheaper setup, but Walsh’s push for the mess hall set filled with hundreds of extras brilliantly pays off as the humiliating location for his hysterical breakdown. As the camera follows the whispers along a table in one long parallel tracking shot, we anxiously anticipate the reaction that awaits it at the other end, where Cody’s agonising screams and sobs finally destroy the hardened image he had cultivated over the years.

As a crafter of truly spectacular set pieces such as these, Walsh expertly matches the huge emotions of his characters with kinetic pacing and an impressive coordination of action, bookending White Heat with a pair of robberies that, on some level, both send Cody soaring to the “top of the world”. The first is a resounding success for his gang, offering this mobster film a hint of the western genre as they hold up a train, kill its crew, and leave with their earnings, setting an extraordinary level of ruthlessness in its characterisations and tightness in its editing. The final set piece closing out White Heat is even more explosive, as Cody sets out to infiltrate a chemical plant with a tanker full of his men to steal its payroll, while unwittingly collaborating with an undercover police officer, Hank, whose plans steadily derail his own.

Some brisk intercutting and a swift barrage of long dissolves efficiently narrow the police in on Cody’s “Trojan tanker” while this narrative drives towards its climax, and when the two sides of the law finally converge at the plant, Walsh makes remarkable use of its labyrinthine layout and industrial architecture to stage the thrilling final showdown. From high and low angles alike, frames are crowded by winding, metal pipes, and Walsh exhilaratingly sends Cody hurtling through offices and corridors, until he reaches a field of gas storage tanks.

Though he is the last man standing and finds himself surrounded by police, Cody is still dementedly giggling as he climbs one of the globe-shaped structures, elevating himself above everyone else. “Made it Ma! Top of the world!” he madly shouts as he shoots at the tank beneath his feet, going out in a literal blaze of glory. The following line which virtually explains the metaphor to those who missed it is an unfortunate misstep, though it only barely dulls the impact of this dazzling finale. In Walsh’s tight construction of this marvellously compelling character study, White Heat recognises that such ambitious, extravagant grandeur will only ever be fleeting for men as vile and deeply troubled as Cody Jarrett.

White Heat is currently available to rent or buy on iTunes, YouTube, and Amazon Video.