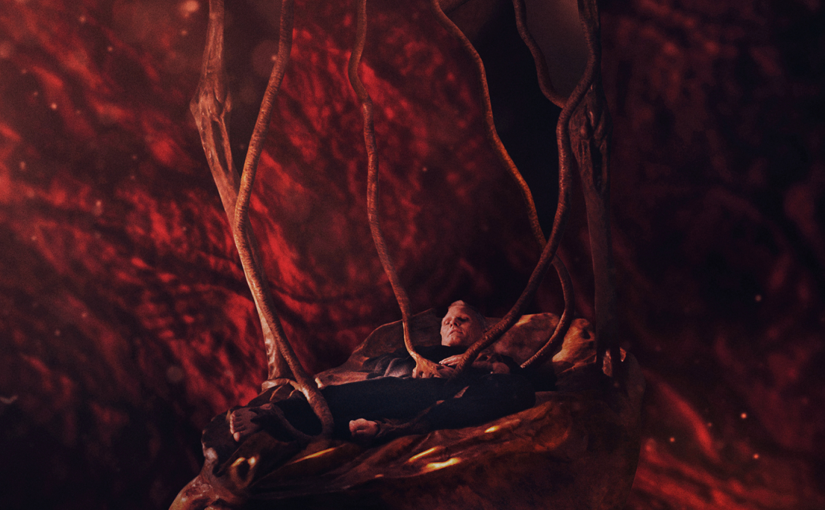 Watching David Cronenberg pick up the scalpel to return the world of body horror feels a lot like seeing a surgeon re-enter their operating theatre after twenty years of exploring other interests. It is certainly exciting that he is once again engaging so closely with the enthrallingly fragile nature of the human body, but there is a certain rustiness on his part when it comes to calling back up those old talents. That Crimes of the Future never quite demonstrates anything close to the peaks of his finest work is disappointing, and yet the noir-tinted direction he takes his science-fiction narrative of twisted surgeries and clandestine politics is fascinating all the same. As we follow Viggo Mortensen and Léa Seydoux’s experimental performance artists into the heart of a conspiracy involving radical evolutionists and genetic mutations, Cronenberg takes macabre pleasure in unfolding its dark mysteries, constructing a grotesque, futuristic society where physical pain has disappeared, and body modifications are commonplace among citizens.

If this is Cronenberg’s take on the neo-noir genre, then Kristen Stewart makes for a suitably offbeat, agitated femme fatale as Timlin, the fidgety government bureaucrat with a growing fascination in the artistic affairs of Saul Tenser. “Surgery is the new sex,” she whispers to him after one of his shows, where his partner, Caprice, operates on his body using a small, remote device. As its boney appendages slice open his skin and extract the vestigial organs which his medical syndrome causes him to routinely grow, she narrates the act like a theatrical performance, sensually drawing in her audience to this novel pleasure that removes bodily contact from sexual intimacy and replaces it with cold, sharp tools. Even through the prodding and picking of his tumorous, pink lumps, he willingly remains conscious, taking pride in this uniquely stomach-turning artistic expression that challenges its audiences to keep watching in fascinated horror.

If surgery is the new sex, then it makes sense that the “old sex” is something that many people in this mutated world have lost touch with, Saul being one of them. At home, he sleeps in a strange, organic mass that hangs from the ceiling by tentacles, and he eats in a chair of bones that grind and creak with his digestive system. Out in public, he is rarely seen without his black, hooded cloak, hiding him from the eyes of others. By his very nature, he lives in extreme discomfort, only barely managing to get by in this grim world made all the more problematic by the administrative regulations that demand he turns in his newly evolved organs for cataloguing and storage.

Enter Detective Cope, a police officer who uses Saul and Caprice as his way into the underground performance art scene, where he hopes to track down a group of progressive evolutionists pushing for the biological advancement of humanity beyond the government’s control. Their body modifications have allowed them to digest plastic, meaning that they can feed on their own industrial waste and consequently cut down on pollution. To them, this is the next logical step in human evolution, and the discovery that the leader’s son, Brecken, is the first to inherit this oddity as a genetic trait promises a significant shift in power for those bureaucrats at the top, threatening their attempts to hinder the natural development and adaptation of life.

As intriguing as this eccentric premise is, Cronenberg’s storytelling tends to lose itself at times, struggling to connect subplots and at times even letting them drop off entirely. Caprice’s personal exploration of modifications on her own body offers the broader narrative very little besides some truncated character development, and even Timlin’s arc is ended rather abruptly without so much as a conclusive final appearance of character.

Still, there is something to be said for the murky, uncomfortable atmosphere that Cronenberg crafts in his cinematography, lighting grim sets of rough stonework and industrial metals with a faint, golden light, suggesting a civilisation that is sophisticated in its ideals yet primitive in its implementation. Everything in its provocative visual design harkens back to the raw form of the human body, evoking muscles, bones, veins, tendons, and fluids in otherwise artificial props, while outlandish prosthetics adorning the faces and bodies of his actors bind the film even more tightly to its peculiar take on artificial evolution. Beneath it all, Howard Shore’s reverberating synths pound and drone to vague melodies, casting a new age hypnotism over his audience.

If Crimes of the Future feels as if it is trying to address too many political and social ideas at once, then there is at least some formal cohesion in the link between Cronenberg’s two most central contemplations – the government’s bureaucratic restrictions on bodily autonomy, and the use of that autonomy to challenge the status quo with provocative artistic expressions. Creations such as these are as personal to their makers as one’s own biological organs, he conclusively reasons. Onlookers who search for affirmations of their most positive feelings may criticise these sights as depraved and distasteful, and yet for artists like Caprice and Cronenberg seeking to reveal the anarchy of their minds, such spectacles ultimately serve a very real purpose in exposing the raw, primal nature of humanity’s physical and psychological existence.

Crimes of the Future is currently playing in theatres.