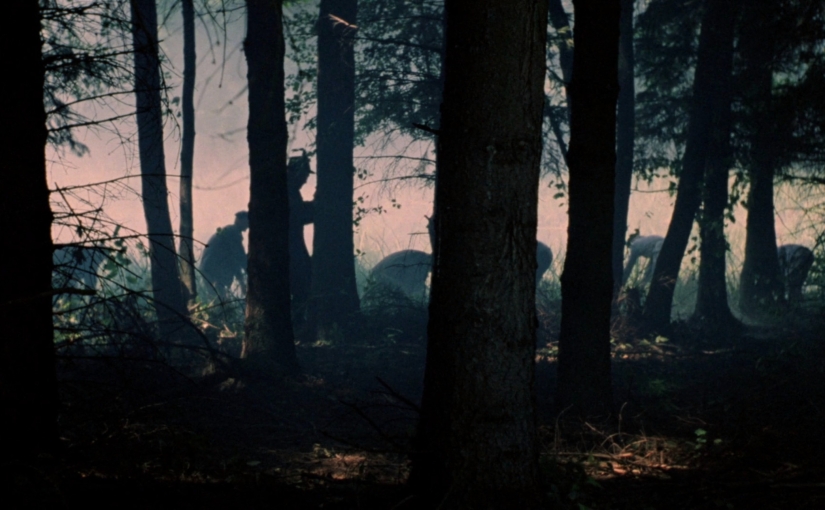 Somewhere deep in the heart of Poland, loggers, developers, and civil servants are hard at work discussing plans. Their silhouettes stand behind columns of trees, splitting the frame into fragments that will soon coalesce into whole images as the natural vegetation is cut down. It might look as if the forest is collapsing in on itself, though down below we can clearly see men with chainsaws carving out a blank canvas for their associates to build on. Krzysztof Kieslowski had experimented in the realm of documentary and television before this point, but his theatrical feature debut The Scar acts as a launch pad for an illustrious career that would only go on to reach grander heights, probing questions in the realm of politics, metaphysics, and religion.

Relative to his great masterpieces of 80s and 90s cinema, The Scar is a modest piece of social realism, so grounded in the details of Communist Poland’s bureaucracy and use of non-professional actors that one might mistake certain scenes as being entirely real. At town forums where locals protest the development of the new chemical factory, dialogue spills out chaotically, and it isn’t hard to believe that the constant stumbling and interruptions might just be authentic expressions of anger. Though we are sympathetic to their plights, it is Party member Stefan Bednarz whose journey is placed at the forefront here, struggling against both the short-term thinking of the angry townspeople and the inefficient administration of his own co-workers. Kieslowski’s scathing critiques of Poland’s attempts at progress are organically woven into these interactions, each one chipping away at Stefan’s idealism until all we are left with is a frustrated, disillusioned man.

From behind glass windows, Stefan looks out at the industrial results of his efforts. Steel beams and towering concrete structures imprint against the frigid white landscapes of the Polish winter where trees once stood, like colossal monuments to human progress. Though The Scar is rooted in a realistic style like most of Kieslowski’s early work, there is something a little otherworldly in his sparse musical score, particularly memorable in the scene of Stefan switching the lights on and off from within his office. When it is dark, we can see the industrial architecture outside, though when the lights come up we catch his reflection in the glass, infused with the modern development that, depending on any character’s perspective, has either destroyed this small town or given it a future.

“We haven’t accomplished all we wanted to here. And neither have I,” laments Stefan towards the end of the years-long project, wishing to leave it at the earliest possible opportunity. Seeing his colleagues kick out a reporter with whom he has developed a casual friendship is one of the last straws. The government’s lack of openness not just with the public but within its own ranks is its ultimate downfall, failing to connect with the state of the world in any meaningful way.

That detachment is one that pays off towards the end as the men in suits stand multiple storeys above the congregating factory workers below, staring in fear at what possible unionisation might be taking place to dethrone them from their tower. The sequence is wordless but powerful, delivering both a sense of unease and a taste of hopeful change on the horizon. Perhaps this potential uprising could have been averted had there been more men like Stefan in the Party, though that may be too optimistic for Kieslowski. As far as we see in The Scar, Poland’s soulless, corrupt bureaucracy is operating exactly as it was intended.

The Scar is currently streaming on The Criterion Channel.