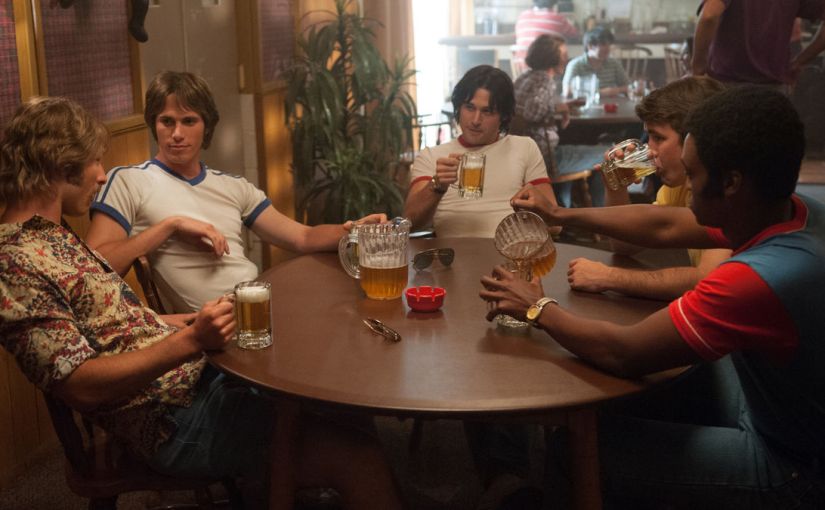 The pretension and faux-philosophising of Richard Linklater’s untroubled Generation X characters is much more a distinguished feature rather than flaw of his wandering, nostalgia-ridden screenplays. The times we spend within these worlds are often defined within microcosmic bubbles, and yet his unhurried narratives unfold with the sense that they could go on forever, treading the line between hedonism and enlightenment with an air of self-assurance. That Everybody Wants Some!! acts is a spiritual sequel to his 1993 coming-of-age movie Dazed and Confused rather than a direct continuation is an important distinction to make – high school freshman Mitch Kramer will forever be 14-years-old as far as we are concerned, just as his older counterpart in this film, Jake Bradford, will eternally be 18, permanently existing within those three, carefree days leading into the official start date of the 1980 college semester.

As usual, plot is the least of Linklater’s concerns. Everybody Wants Some!! is richly character-driven, and while each member of this college baseball team is defined early on by their quirks and relationships, it isn’t until after the accumulation of time they spend together that we, along with Jake, begin to sink into the cool dynamic between them. This isn’t to say that they are all chilled-out pleasure seekers, especially given the egos running high among that always seem to have something to prove in the inanest competitions. These young men make each other’s knuckles bleed in feats of endurance, defiantly offer “triple or nothing” bets in games they are already losing, and the tempers in some run particularly short, leading to bar fights. But the stakes remain extraordinarily low all through this film, and it is through those scenes where their strengths, flaws, and idiosyncrasies emerge organically with little external pressure that we begin to accept them as they are. Beauter will always be unusually protective over his real name, just like Niles will always be a little highly-strung and Finn will always be a smart-ass. Even if they fail to identify it in themselves, there is real significance to their petty struggles, reflecting the trials of a young generation as equally disillusioned as they are idealistic.

This chasm between their surface behaviours and the philosophy Linklater thoughtfully considers beneath the veneer of masculinity only ever closes on rare occasions. It certainly doesn’t happen in those scenes where Willoughby rambles on about finding who you are in “the tangents within the framework” of a Pink Floyd song before taking a massive bong hit, though Linklater doesn’t cast heavy aspersions on his aloof, ostentatious behaviour. As it is revealed later, he is a 30-year-old who fraudulently adopts different names to keep returning to college, unable to let of the past much like Matthew McConaughey’s character in Dazed and Confused. This man is living with a huge amount of cognitive dissonance that no amount of drugged-out meditating will solve.

It is rather in a quiet, tender moment between Jake and another girl on campus, Beverly, where a touch of innocent self-awareness emerges. As they enjoy the last few hours of joyful freedom before classes begin, they disappear from campus and savour their time together in a nearby lake, sharing their loves for baseball and theatre. After spending the past three days quietly observing and learning the ways of college life, he finally opens up with his own personal interpretation regarding the Greek myth of Sisyphus. To him, the endless task of pushing the same boulder up a hill every day is a blessing, not a curse, creating meaning in the absence of any broader purpose, and through that both he and Beverly begin to understand each other’s passions a little more.

“Things only mean as much as the meaningfulness we allow them to have.”

This isn’t necessarily profoundly deep to anyone who has considered philosophy before, but Linklater fully recognises the beauty in these young people happening across such ideas for the first time. Save for a few gracefully languid camera movements that let us lazily drift between characters and colourful murals splashed up against walls as backdrops, Linklater does not imprint an overly interesting cinematic style on his film. It is rather his commitment to the subtle form of the piece that Everybody Wants Some!! gradually evolves into a compelling, unhurried study of young adulthood at the point that one is truly free from their parents for the first time. In the bottom right corner of the frame, Linklater will often reveal time stamps counting down until class begins, when some sort of routine and structure will be brought back into the lives of Jake and his friends. But in those three days set out from the start where the only rules given to them can easily be broken without consequence, time seems to stretch on in eternal excitement for whatever comes next.

Everybody Wants Some!! is currently available to rent or buy on iTunes, YouTube, Google Play.