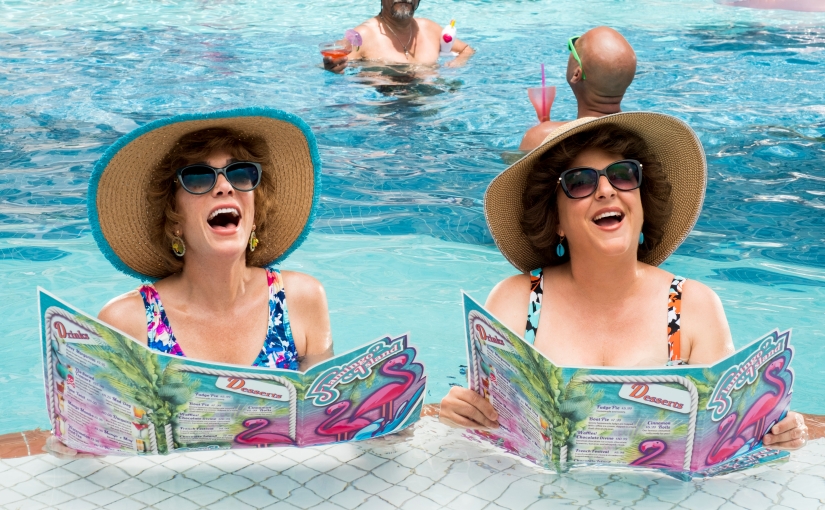 At their weakest, those comedy movies from Saturday Night Live alumni will string together sketches showing off little more than the improvisational talents of its actors, certainly entertaining but achieving little more. The pastel-coloured romp that is Barb and Star Go to Vista del Mar is automatically a step above most of those simply for not falling into the same trap of flatly shot, disjointed vignettes, but there is also promise from young 22-year-old director Josh Greenbaum that transforms it into a nonsensical visual treat. No doubt there are plot points here which don’t quite cohere with everything else, but with a Marx Brothers-style commitment to absurdly creative dialogue and gags, the collaboration between Greenbaum, Kristen Wiig, and Anne Mumolo pushes the film’s narrative logic in hilariously unexpected directions.

Barb and Star themselves are refreshingly original characters, amusingly naïve yet endlessly talkative. These two middle-aged Midwestern divorcees have never considered a world beyond their small-town retail job and suburban “talking club”, where conversation ranges from such trivial topics as the comfort of wicker furniture to character socks. Both Wiig and Mumolo play them as a pair of identically minded best friends with decades of rapport, effortlessly bouncing off each other’s comedic offers with light-hearted poise. In their introductions, as they move from one menial conversation to the next, we cut between close-ups of their short, coiffed hair, their plain heels, and their simple jewellery, each gently bobbing in time to Shania Twain, and in this playful piece of editing Greenbaum ties these frivolous characters to their meekest, most pedestrian qualities.

One could point to the flaws in the writing for the villainous Sharon Fisherman, also played by Wiig in a Dr Evil-type double role, as well as some of the scripted jokes which fall flat, but there is no denying the pure comic ambition in Greenbaum’s inventive staging of visual gags, frequently calling back to classic screwball conventions. They are present in those quieter comic beats, in which Barb drifts by on a pool float in the foreground to secretly meet up with the handsomely villainous Edgar while leaving an unassuming Star in the background, as well as in formal repetitions which see both Barb and Star go on virtually identical dates independent of each other, but Greenbaum’s vision especially shines in two musical numbers. The first of these excitingly jolts us into the blue-and-pink utopia of Vista del Mar, delivering an over-enthusiastic welcome much like that which introduces us to the Emerald City in The Wizard of Oz. The second is a soulful power ballad that submits even further to the self-conscious kitsch design of the film, complete with dramatic long dissolves and a hysterically overwrought performance from Jamie Dornan.

There is little here that adheres to a singular universal logic, especially as the narrative takes great pleasure in manipulating the laws of probability and physics so that everything aligns with Barb and Star’s ludicrously sunny dispositions. Whenever something vaguely troublesome or problematic is brought up, it is amusingly swept under the rug as a throwaway joke, and it is in this manner that we can accept the co-dependency of both women, which would certainly be addressed with more weight in a more serious film. As it is, Barb and Star Go to Vista del Mar is happy to tease us with its dark and bizarre tangents before defiantly snatching them away, aggressively sticking by its relentlessly bright temperament right to the end.

Barb and Star Go to Vista del Mar is available to rent or buy on iTunes, YouTube, and Google Play.