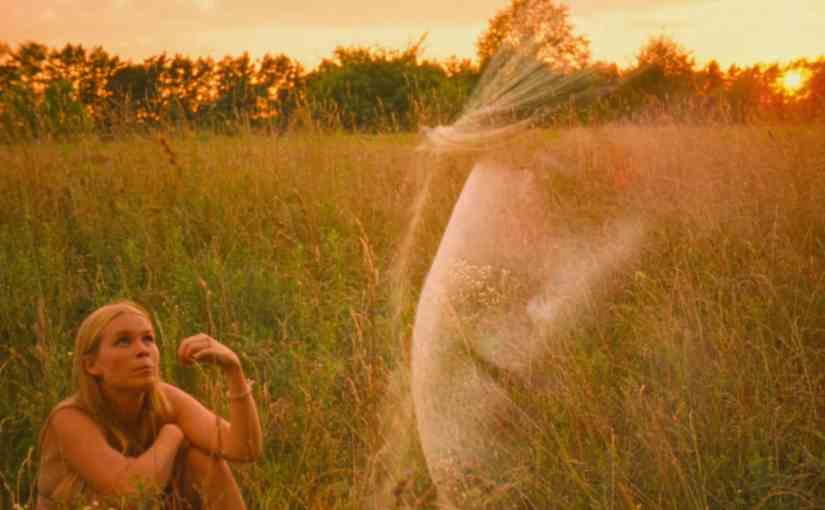 Even rarer than a director making a debut film of as high a calibre as The Virgin Suicides is a director doing so in their twenties, but then again Sofia Coppola is no ordinary filmmaker. Being raised by one of the great masters of cinema, Francis Ford Coppola, there were surely lessons passed on from one to the other, but an even more distinct image of her childhood and adolescence emerges in the closed-off, dreamlike spaces her stories unfold within, meditating on notions of celebrity, privilege, and disillusionment.

Michelangelo Antonioni might seem like a fitting comparison to draw here tonally, and yet stylistically The Virgin Suicides is more often in line with François Truffaut, playfully removing us from the immediacy of the narrative to freeze frames over character introductions, playfully opening up an ‘x-ray’ iris to peek at a pair of underwear, and dividing shots with creative split screens. With a nostalgic voiceover playing over the top of it all, a pensive yet whimsical atmosphere takes hold through which the lives of the Lisbon sisters are languidly filtered. The power they hold over the neighbourhood boys is immediately evident in the intrigue and reverence with which they are shot, like sacred mysteries to be untangled. The influence they continue to exert long after this story ends also remains clear in the narration’s wistful mythologising, speaking in first person plural without clear individuality, like an embodiment of the entire town reflecting on its own history.

As such, there is also an element of destiny which haunts this narrative like a ghost, slyly directing the sisters down a tragic path of self-destruction right from the youngest’s very first suicide attempt. Maybe their fate was spelled out from the start, but more likely is that it is simply the concoction of an unreliable narrator, imagining an aura of sacrosanctity around these girls who are put up on pedestals by both the town and their own conservative parents. As the local boys pry through one of their diaries, their imagination of its contents manifest in a graceful montage of open wheat fields, unicorns, sparklers, and close-ups of the sisters’ faces lightly flowing in dreamy long dissolves, and illuminated under the gorgeous glow of golden hour lighting. “We knew they knew everything about us, and we couldn’t fathom them at all,” the boys extol in wonder, and yet such daydreams only set them up for disappointment in those moments when that mystique briefly fades away.

The second-youngest daughter, Lux, especially begins to stand out as the source of this disenchantment. Under tight restrictions from her parents, school heartthrob Trip is given permission to take her out to the homecoming dance, though it is when the two finally make love that her allure suddenly disappears. In a beautiful day-for-night wash across the school football field, he stands up and silently walks away in the early hours of the morning before she wakes up. “I liked her a lot, but out there on the field… It was just different then,” an older vision of Trip reflects, still unable to properly sort through his feelings though clearly no longer under the spell still possessing so many of his friends. Though he has found the heart of the legend, the only riches he has discovered is a real, vulnerable human.

And then there is Mr and Mrs Lisbon, whose reactions against having their image of their daughters ruined manifest far more severely than mere indifference. Their home becomes a prison, and perhaps here that aforementioned Antonioni influence does manifest in Coppola’s framing of the sisters within tight spaces and behind staircase bannisters. Outside, a time lapse of the house shows no one going in or out, and yet the boys continue to watch from across the street, plotting ways to contact and rescue the trapped girls. There is little these sisters can do to take control of their own narratives, especially as they brought to national attention in news stories more than once, further propagating the mythology they would much rather shed.

One has to wonder whether such obsessions would exist at all had these parents not locked their daughters down so tightly, thereby creating the illusion of great treasures hiding behind closed doors. In the sleepy, yellow radiance that bathes this small, 1970s Michigan town in the sentimentality of memory, Coppola might initially seem to be participating in the tender worship of these young girls. It is in those moments where she sees them as flawed beings though that they are brought back down to earth, transforming the film’s affectionate fascination into a poignant recognition of pain, longing, and overwhelming grief.

The Virgin Suicides is currently streaming on Stan, and available to rent or buy on iTunes, YouTube, and Google Play.