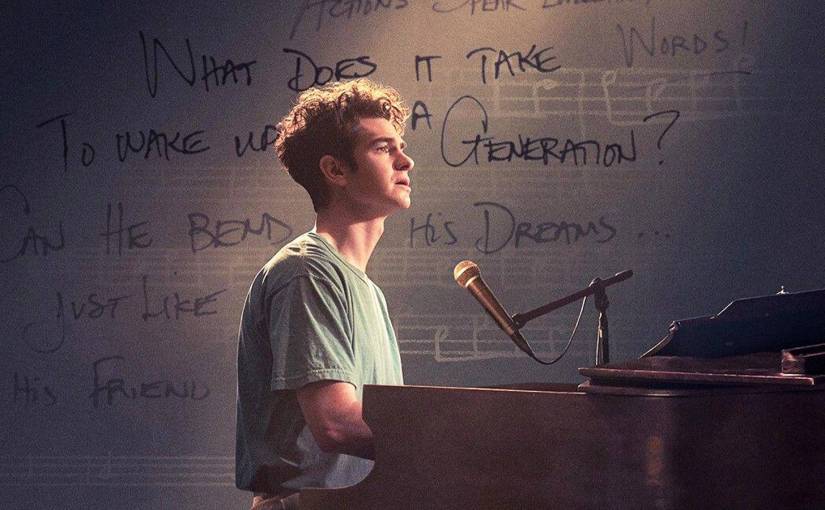 Since the explosion of Hamilton on Broadway in 2015, it has been nearly impossible to escape the pop culture presence of the playwright behind it. Lin-Manuel Miranda has sung, written, acted, and produced his way into the upper echelons of the theatre, film, and television communities with a joyful passion that has been embraced by most and shunned by others who have deemed his upbeat attitude too corny or intense to be loveable. How fitting it is then that his foray into movie directing centres a figure who once could have inhabited a very similar place as him. In 1996, Jonathan Larson’s rock musical Rent reached similar heights as Miranda’s own decade-defining, hip-hop spin on America’s Founding Fathers, though it was the night before its Off-Broadway preview that he unexpectedly passed away from an undiagnosed illness. Tick, Tick… Boom! seeps with a zest for life shared by both artists that can easily turn off any cynic unprepared for such open embraces of bohemia and playful, self-aware numbers, and yet at the same time Miranda plays out a deconstruction of the artist that may still hold hope of winning over his detractors.

While based off a semi-autobiographical musical of the same name that Larson himself wrote before Rent, Tick, Tick… Boom! also uses a performance of the very show as its own framing device. At the New York Theatre Workshop in 1992, he opens with a monologue. In his head, he has been hearing a ceaseless ticking noise. It is not a technical problem, a musical cue, or a joke, he tells the audience. It is an unstoppable countdown to the moment where he realises his youth, energy, and life has been squandered, and now on the verge of turning 30, he fears that that inevitable ‘Boom’ is close by. We cut to two years earlier, a time when Jonathan has been working on an entirely different project altogether, Superbia, and all throughout the film that ticking comes and goes, a reminder of what waits for him on the other end.

In Miranda’s skilful intercutting between both timelines, an interaction forms between Jonathan’s fiction and reality. Not just in the manifestation of his life in art, but the act of creation itself impedes upon everything else, from his relationships to finances. As we listen to a song comically expressing the complexity of arguing with your significant other, we simultaneously watch such an argument unfold with his girlfriend, Susan, and then just as it seems as if it has been resolved she catches Jonathan’s fingers tapping out a rhythm. Even in the heat of a quarrel, that artistic instinct to transpose real life into music remains. Or is it just an impulsively selfish disconnection from other people? Even then, that song we are watching composed and performed concurrently are not perfect reflections of each other. The resolution found in Jonathan’s musical interpretation is nowhere to be found in reality, but instead becomes a concoction of pure fantasy, embodying the exact kind of detachment that Susan has accused him of.

The power that Jonathan’s songs carry seems to radiate back from these future performances all through Tick, Tick… Boom!, as in one scene we watch the chaos of a busy diner suddenly dissipate in a burst of tranquillity the moment the first chord of “Sunday” is struck. Miranda’s visual aesthetic is at times plain enough to expose his relative inexperience in film direction, and yet his love for theatrics explodes forth in this number where Jonathan lowers the wall of the restaurant to create a stage upon which the figures of his imagination harmonise in a display of choral brilliance.

Given how much of himself Jonathan puts into his work, those sly references to Rent that continue to turn up are a little more earned than the typical piece of fan service. For better and for worse, his art is very much an obsession, and Andrew Garfield takes the composer’s electric, frazzled energy to new heights even beyond those songs that distil his complicated life into purely emotional expressions. It is also in those moments when Jonathan’s creative block keeps him from summoning up a single note that his desperation and frustration spill forth, and that anxiety around being unable to produce anything of worth takes over. The sentimental voiceover that caps Tick, Tick… Boom! might be a little too jolting even for Manuel fans, especially given how far it steps outside its own narrative form without proper setup, but with the fresh perspective of hindsight, Manuel lends the ticking motif an extra edge of poignancy, extending Jonathan’s fear of time running out to an existential fear of one’s own mortality. Death may arrive as a slow decline or a nasty surprise, but just as both Manuel and Larson strongly abide by in Tick, Tick… Boom!, it is also makes everything that precedes it all the more valuable in its fleetingness.