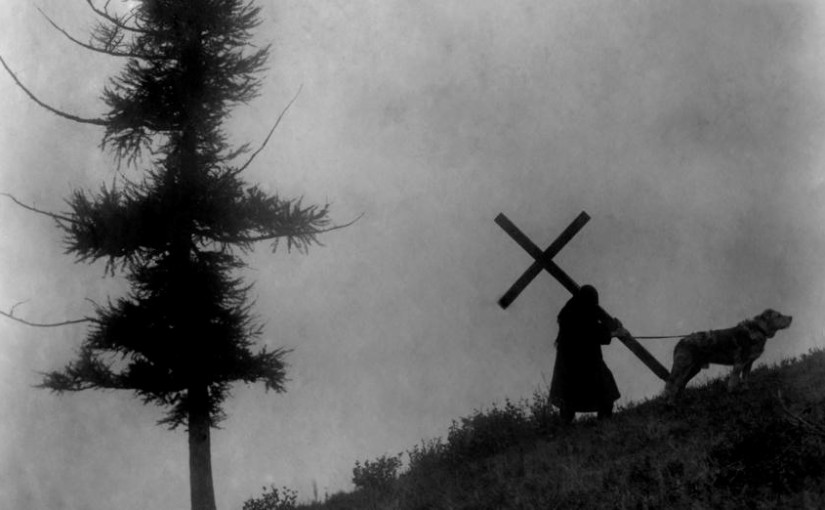 How odd it is that Abel Gance, this intellectual, pioneering filmmaker, has become so forgotten over the decades. One would have to assume that the reason for this is because of how lengthy his most famous films are, and how difficult it is to find any copies of them. La Roue may not have anywhere near the reputation of Napoleon, but it is surely an incredible achievement of epic storytelling in silent film, miles ahead of what so many others were attempting to do with this new medium in 1923.

Gance is clearly well-read when it comes to the classics, drawing on quotes from such towering literary figures as Sophocles, Rudyard Kipling, and D’Annunzio to ground La Roue in archetypes and symbols. The biggest influence is evident though in the structure of the meta-narrative, which tells the story of a father who adopts an orphan girl, and then follows their relationship into her adulthood. Save for some key deviations, this is the skeleton of Les Miserables, and indeed Gance stated that he wished to be known as “the Victor Hugo of the screen.”

Though he is not part of the Soviet montage movement taking place around the same time, Gance displays a keen awareness over the power of intercutting, montage, and rhythm in his editing. The opening train crash is a thrilling explosion of images – two trains colliding, passengers crawling out windows, plumes of smoke rising over the chaos, a third train heading towards the wreckage, and among it all, the red-tinted hand of a small girl reaching out of the rubble. Later montages build to rapid-fire climaxes, in which images are thrown at us so quickly that our only response is to merge them into a singular, frantic emotional response. But here, Gance lets us breathe – our protagonist, a railroad engineer by the name of Sisif, successfully saves the day, and takes in a young girl, Norma, whose mother died in the accident.

This half hour of setup is merely the prologue. What follows is a story in four parts, the first of which jumps forward approximately twenty years in the lives of this father and daughter. Sisif also has a biological son, Elie, who believes alongside Norma that the two are siblings. When Sisif develops uncomfortable feelings towards his surrogate daughter, this once beautiful family starts to fall apart, and she is eventually married off to a wealthy aristocrat, Hersan.

It is important to note how inventive Gance is with his camera movement here, four years before F.W. Murnau’s huge innovation in Sunrise: A Song of Two Humans. Gance isn’t rigging up any complex systems for his tracking shots, but instead he makes the most of the vehicles available to him, planting the camera on top of trains, cars, and boats. The effect is dynamic, framing characters in static foregrounds while their backgrounds speed by, and at other times simply letting the beauty of his moving landscapes dominate our attention. At one point Gance captures a sunset across a lake, and in tinting the film with a rich tangerine colour he lets us soak in its warm hues.

La Roue reaches its visual peak at the arrival of Part 3, which sees a dejected, ailing Sisif retreat to the French alps with Elie. Though Gance’s compositions of trains and railways in the first half are attractive, they don’t touch the mountainous vistas that we get here. The snow-capped peaks shrouded in clouds rise up as backdrops to Sisif’s new reclusive life, through which he relearns humility and fatherly love. But we don’t forget the terror of the mountains too easily, as its harsh, unforgiving nature proves to be the literal downfall of Elie. For all its healing beauty, opening old wounds in this environment can have devastating consequences.

Gance is always sure to make the avant-garde choice at the most impactful moments, as Sisif’s mournful ride home on his cable car is represented by negative film, with flashes of Elie’s broken body interspersed throughout. His grief and shame bleeds through every single stylistic choice, especially in the use of double exposure to reveal the tangibility of his perverse obsession over Norma. When he stands outside her bedroom door at night, he can almost see through to its other side. When she disappears from his life, a phantasmic memory of her playing manifests over an empty swing set. This technique effectively represents the imprint of Sisif’s mind on reality, illuminating a hunger for what he knows he can never have.

It isn’t an easy narrative to sit through, but Gance is right alongside us in realising just how uncomfortable this father-daughter relationship is. Both Sisif and Elie recognise that their adoration of Norma is closer to an “infection” than love, and the literary passages that appear in intertitles especially hammer home the twisted nature of Sisif’s inner conflict.

“You look at her and you smile. And as you smile, an atrocious thought comes to mind, against which your entire being shudders with repugnance.” D’Annunzio

It is the tangle of relationships between Sisif, Norma, Elie, and Hersan that propel all 7 hours of this, and although there is certainly excess narrative here that could be cut out, it isn’t nearly as much as one would expect from looking at the run time. It is hard to imagine which specific plot points might be missing from the shorter versions, though some individual scenes would benefit from some trimming.

What gives La Roue such excellent form even more than its narrative is its central metaphor, right there in the title – the Wheel. It is a rare scene that doesn’t recall this motif, as Gance is sure to consistently evoke its symbolism in literary passages, cutaways to train wheels, and even in the subtle use of iris shots to frame circular objects. The Wheel represents the natural rhythms of life, spinning for all eternity, seeing new generations grow up and replace the older ones.

As a railroad engineer, Sisif is literally responsible for keeping the Wheel moving, and yet his latent lust after Norma is a subconscious attempt to buck it. He strongly associates his daughter with his train, and his destruction of it coincides with his decision to cut off Norma completely. But even at Sisif’s lowest, the Wheel keeps turning, as we see in each chapter break.

“And it is said that they themselves cannot free themselves of the Wheel.” Rudyard Kipling

It is only when the natural father-daughter relationship between Sisif and Norma is restored in all its purity that they allow themselves to be swept back up in life’s natural motions. High up in the French alps, Norma joins in the “Dance of the Wheel” at a festival, spinning around in a circle with the rest of the villagers. A now-blind Sisif sits in front of a window in his house, picturing the celebration taking place outside his home. While Norma is prolonging these cycles, Sisif quietly passes away, stepping off the circular journey that brought him so much pain and joy.

Though he is experimenting with a relatively new art form, Abel Gance’s absolute devotion to paying tribute to his literary idols endows La Roue with a great deal of historical weight. It is a thrilling, disturbing, and moving piece of epic cinematic poetry, drawing on the works of great writers to craft a narrative with as much to say about life, obsession, guilt, love, and death as any of its influences. It stands incredibly tall as a breath-taking example of what silent film can achieve, especially when the shackles of conventional filmmaking are broken to make way for experimental editing, camera movement, and visual compositions.

La Roue is currently unavailable to watch in Australia.