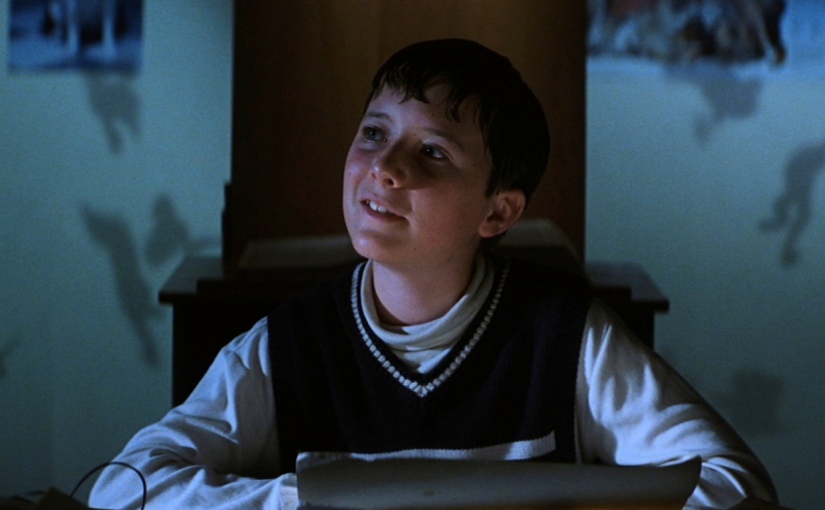 When a film wrestles with metaphysical, formal ambitions this colossal, any piece of writing about it pales in comparison. Magnolia is sprawling, dense, energetic, but also, quite remarkably, completely focused from start to finish. There are layers stacked upon layers of interpretations that could be read into it, and though I don’t give points for how “deep” a film is, Paul Thomas Anderson’s metaphors, parallels, and motifs weave together in such an intricate multilinear narrative structure that Magnolia ultimately becomes one of the most remarkable demonstrations of film form committed to celluloid.

This complex high-wire act isn’t an easy feat either given how large and diverse this ensemble is, and yet Magnolia’s epic scale only gives more power to the remarkable coincidences which bind each of its characters under a series of escalating improbabilities. After a prologue which recounts three separate incidents of unlikely people being drawn together through either fate or chance to dramatically affect the course of each other’s lives, Anderson begins introducing us to his cast of lonely souls, dying patriarchs, and neglected children starting a new day. There are some small relationships and common traits established early on, but the real mystery lingers beneath the opening montage – how will these strangers eventually be united?

After the great successes of Hard Eight and Boogie Nights, it is impressive that a 28-year-old Paul Thomas Anderson had already built relationships with so many experienced actors eager to commit themselves to Magnolia. Julianne Moore and William H. Macy return for their second collaborations with the young director, Phillip Baker Hall, John C. Reilly, and Philip Seymour Hoffman are back for their third, and there is no doubt that this is a significant achievement for them all. With casting like this, Anderson guarantees that there is not a single narrative thread in this colossal three-hour film that is any less emotionally involving than the others.

It may have been somewhat surprising in 1999 that Tom Cruise would be the one to come away with the single greatest performance of this stacked film, as pickup artist and motivational speaker, T.J. Mackey. His aggressive, narcissistic, dick-waving stage persona is barely toned down even when he steps into a side room for an interview, as he athletically tumbles around in his underwear ready to put on a show for the journalist. Yet the moment a sensitive topic is lightly prodded, he immediately tenses up, and the strained artifice of Mackey’s phoney identity begins to unravel. The man we find beneath it all is still contemptible, but we at least begin to understand how his flaws are born from the trauma of an abusive father, like so many others in Magnolia.

Some characters may be more sympathetic than others, and yet Anderson never wavers from the perspective of an omniscient universe looking into the unlikely, colliding lives of these strangers. What are the odds that a police officer called Jim goes on a date with the daughter of a quiz show host named Jimmy, and then in the same day comes to the aid of one of that show’s past contestants? Probably no less likely that a resident of Greenberry Hill is murdered by three men whose surnames are Green, Berry, and Hill. On a microcosmic level, any one of these strange occurrences considered on its own may seem like the work of mystical forces, and perhaps it is – but an unknowable, complex god is virtually identical to an unknowable, complex universe, ticking along until the immortal monkey at the typewriter accidentally writes the complete works of Shakespeare. As child prodigy, Stanley, concisely puts it:

“This is something that happens.”

And that is all there is to it. There is no cause or explanation for the happenstances we witness, just some arbitrary poetic justice that unexpectedly forces each character involved to re-assess the paths they are on.

Yet Anderson gives us pause in committing too much to this “senseless universe” reading, framing Stanley and Dixon, another kid in the neighbourhood, as prophets with some foresight into the machinations of the cosmos. In anticipation of the spectacularly bizarre finale, Stanley watches the sky and asks about meteorological instruments, while Dixon delivers a cryptic rap hinting at other characters he has never met, teases a solution to Officer Jim’s investigation, and concludes it all with:

“When the sunshine don’t work, the good Lord bring the rain in”.

References to Exodus are hard to escape here, as they are used to frame everything from “the sins of the father” being visited upon their long-suffering children, to a freakish plague being cast down from the heavens onto the Earth. There is only so far Magnolia can go before its coincidences start to border on miracles, and Anderson takes pleasure in pushing the limits of probability with divine moments of form-breaking brilliance.

The first major miracle ties into the carefully curated soundtrack, serving an entirely different purpose to the one from Boogie Nights. This selection of Aimee Mann songs isn’t about creating a sense of time and place, but rather keeping a layer of lyrical, melancholy poetry running beneath each story. ‘One’ and ‘Save Me’ are there to open and close the film, but then of course as each significant character reaches their lowest points at the same time, they all take part in singing ‘Wise Up’ as one, uniting the entire cast in a moment of transcendent, musical bliss. Once again, it is only through the perspective of the all-seeing cosmos that we can truly appreciate the incredulity of this coincidence.

As impossible as the final and most significant miracle of Magnolia appears to be, the foreshadowing in the regular weather reports and prophesising has been quietly laying its groundwork from the start. It bears striking resemblance to the plagues sent down upon the Egyptians in Exodus, but it is also possible that it was triggered by some incredibly unlikely sequence of worldly events. Either way, Anderson finds the ultimate poetic justice for each character in this freak occurrence – saving those on the verge of suicide, reuniting estranged parents with their children, and delivering sought-after objectives in ironic, roundabout ways. Where this unexpected event comes from barely matters. All we can know is that it manifested into this universe as “something that happens”, and that it is only significant insofar as how it changes lives going forward.

It may be a travesty how little attention I have paid to the stylistic filmmaking Anderson is skilfully demonstrating here, though perhaps that will have to be saved for another time. In the smooth slipping between storylines it might almost go unnoticed how Anderson is moving his camera in almost every shot – at his most subtle, dollying slowly in on a hopeful, teary face for two full minutes, and at his most audacious, tracking multiple characters through a television studio, each shifting in and out of the frame as the controlled chaos of environment takes over. From the camerawork right down to the propulsive strings underscore persisting across several scenes at a time, this is dynamic, energetic filmmaking, leaving no room for any lulls in its pacing. In the vein of such multilinear films as Nashville or Short Cuts, it is an impressive, Altman-esque balancing act that is being conducted here, and yet Magnolia’s ambitious, metaphysical experiments in cinematic form are entirely unique to the mind of Paul Thomas Anderson.