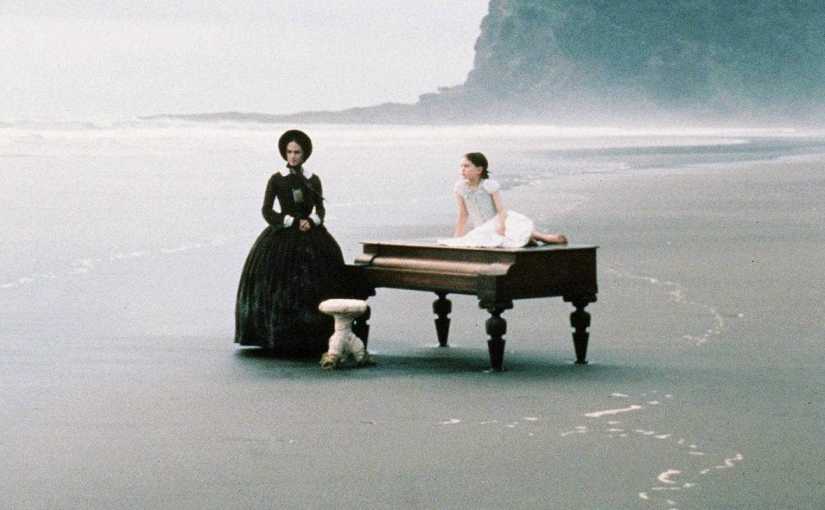 There are few films that one could justifiably open a discussion about by praising its score, but when the movie itself is titled The Piano, there aren’t many better places to start. Michael Nyman’s classical score revolves around a central theme played by Ada McGrath, a mute Scottish woman whose arranged marriage sees her sent to New Zealand with her daughter, Flora, and her piano, shipped all the way from her homeland. When her new husband, Alisdair, abandons it on the beach claiming there is not enough room in his house, it is picked up by another local, Baines, who lets her earn it back in exchange for sexual favours disguised as music lessons.

Though Flora acts as a link between Ada and the world as her sign language interpreter, this form of communication has its limits. The music she plays is the purest manifestation of her real voice, carrying through a rich, full-bodied expression of her restless soul as her fingers glide up and down the keys, the slight details of its shifting tempo, dynamics, and pitch shaping our perception of her fluctuating emotional state. Nyman’s theme “The Heart Asks Pleasure First” is often there in the diegesis of the film, but it also continues to appear in his non-diegetic musical score as well, its lilting melody and persistent, flowing bassline combining to carry the eloquence of Ada’s voice through even when her piano isn’t immediately within reach.

The single most dangerous threat in The Piano is that posed by Ada’s own husband, Alisdair, whose rejection of her musical instrument goes beyond a lack of appreciation for her talent, and becomes an active attempt to silence her, desperately beating her into the role of a submissive housewife. It is a testament to Holly Hunter’s performance as Ada that beyond the way she moves with her music, so much expressiveness can be found in her often-stoic demeanour, commanding the screen even when Alisdair is flailing for domination in his relationship. Beside her is a nine-year-old Anna Paquin who, in the role of Flora, transcends the usual expectations attached to child performances by delivering an outspoken straightforwardness in amongst her tantrums and fibs, balancing out the male egos present elsewhere in the cast. Together, the two make for a powerhouse acting duo of swelling emotions, rising and falling like reflections of Nyman’s delicate musical score.

When it comes to director Jane Campion’s choice of shooting location, it is impossible to undersell the importance of the New Zealand beaches and brush in setting up Ada and Flora’s emotional arcs as strangers in a foreign land, particularly as they are caught in wide shots shrinking them against the grey, misty shoreline. Along the sand, Ada sits at her piano among her possessions, forming the impression of a makeshift home in a beautiful but inhospitable location. With the horizon places towards the bottom of the frame, Campion’s focus remains on the cloudy skies above, offering a gentle ethereality upon which the black shapes of people and furniture are imprinted. In this gorgeous imagery the beach becomes a place of transience, belonging neither to the civilised homes and lush rainforests of New Zealand, nor to Ada’s native Scotland, and it is here where she frequently lingers with her heart split between both places.

As much as Campion’s impressionistic imagery and Nyman’s music artistically speak for Ada’s thoughts and feelings, she is not entirely vocally silent in The Piano. Bookended with voiceovers that offer a glimpse into Ada’s mind, a connection is built in her direct address to the audience. Like the music she produces, she speaks lyrically and with cadences, reflecting on the fate of her piano now sitting at the bottom of the ocean, like a restless spirit put to sleep. Quoting poet Thomas Hood, she recites:

“There is a silence where hath been no sound,

There is a silence where no sound may be,

In the cold grave, under the deep, deep sea.”

Ada may never entirely be at home in New Zealand, as she herself admits to being considered the “town freak” when struck with a physical deformity. But like her sunken piano, existence in such incongruous conditions goes on. And while she learns to communicate with her environment in other, more conventional ways, there is a newfound tranquillity that can be found in the resounding quiet.