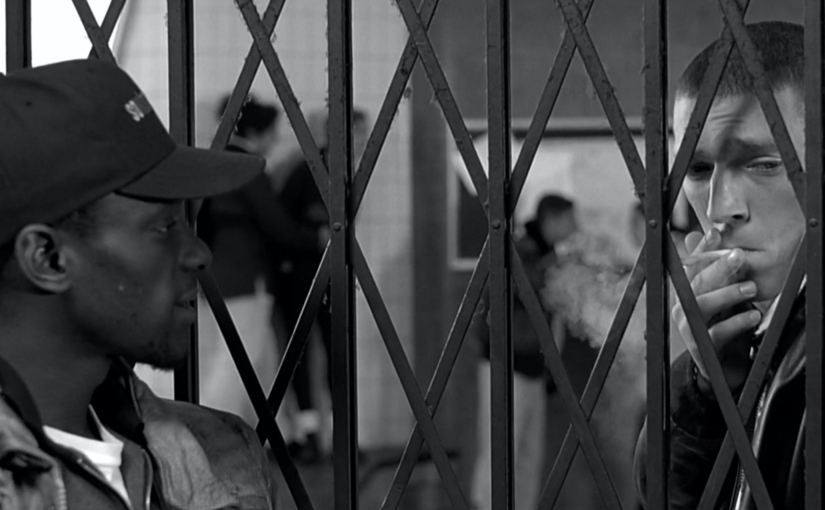 The explosions of violence that take place in La Haine are not cathartic releases of tension. Even after they are set off in riots and beatings, resentment continues to simmer between police, immigrants, and skinheads, so lacking in focus and direction that the inciting motivations seem to be entirely lost. Its momentum is unstoppable, like a man falling from a building, reassuring himself “So far, so good”, yet failing to see the ground rapidly rising to meet him. This is the metaphor that bookends La Haine in voiceover, describing a modern society blind to the inevitable consequences of its own actions. This, along with the time stamps marking key points within the 20 hours this narrative takes place, instils it with an urgency that might as well be a countdown to the final collision between the falling man and the earth.

La Haine comes only six years on from Do the Right Thing, and yet the influence of Spike Lee’s fervent cinematic politicising can already be felt in its thematic and stylistic composition. The wrestle between love and hate that Radio Raheem described seems to be resolved even before this film opens – the French title directly translates to “Hate” in English, and it is that ideal which eats away at the remains of civility and compassion in these projects just outside of Paris. It fizzles with an indignant energy infused right into Mathieu Kassovitz’s dynamic camera movements, at its most vigorous flying through the sky around apartment buildings, and at its quietest restlessly panning around a discussion between characters at its own pace, anxiously anticipating the turning point. As the disillusioned immigrants whose paths we trace through this story stand atop a balcony, Kassovitz even warps the space around them in a mind-bending dolly zoom, compressing them against the streets and city buildings in the background.

This electric energy extends to La Haine’s editing as well, frequently punctuating harsh transitions with the sound effect of a gunshot or punch, and thereby emphasising the raw brutality of such violence. The effect it has is severe, separating the vicious attacks exacted by and upon our main characters from those which define the broader French society, as sketched out in the opening montage of archival footage which lands us in the thick of furious riots. It is there that expressions of outrage coalesce with the naturalistic urban scenery, instilling the film with an organic authenticity that continues to flow through its wandering narrative.

Because in spite of Kassovitz’ wild flourishes of style, the aching social realism of La Haine just keeps bleeding through, disengaging from any traditional notions of plotting so we may instead sit in the mundane conversations that separate one burst of climactic anger from the next. It is especially there where Vincent Cassel excels as Jewish immigrant Vinz, seeking out vengeance for his friend, Abdel, who has been hospitalised from beatings he received while in police custody. The young actor is a loose cannon in this role, always appearing to be a few seconds away from flying off the handle. When he is alone, he squares up to a mirror and recites the unhinged “You talkin’ to me?” scene from Taxi Driver, like a wannabe Travis Bickle trying to prove his own toughness. And yet there is also a deep tragedy to Cassel’s performance, exposing a wounded man who knows no other way to deal with the awful hand society has dealt him, and who gradually realises the futility in his directionless anger. Like an addict though, Vinz keeps falling back on that rotten hatred, pulling him closer to the ground that he will inevitably meet with full force.

Along with his friends Hubert, an Afro-French boxer, and Saïd, a North African Muslim, Vinz becomes a primary subject in Kassovitz’s monochrome portrait of disillusioned youths, whose most hopeful prospects are that they might eventually be able to escape the projects where they live. His blocking of them all across layers and levels of the frame forms some affecting character compositions, and he especially forges a tight emotional connection with them in those shots where they direct lines right into the camera.

Even while we watch them aggressively provoke strangers, we still can’t help but feel attached to them through their plights, as well as great concern for their safety as tensions ramp up. A literal Chekhov’s gun is established early on when we discover that Vinz has stolen a gun from a police officer at a riot, and each time he pulls it out as an assertion of his own masculinity we feel even more certain that it will be fired before the end of the film. When the time comes for our suspicions to be answered though, all we are left with is an ambiguous stand-off that refuses to reveal which side is on the end of the bullet’s trajectory. On a broader societal level, it may not even matter. With each senseless killing only going on to spur more of its kind, the rundown French suburbs of La Haine become a breeding ground for bitter hostility, perpetually plunging towards the ground, and blindly, vainly reminding itself – “So far, so good.”

La Haine is currently streaming on The Criterion Channel.