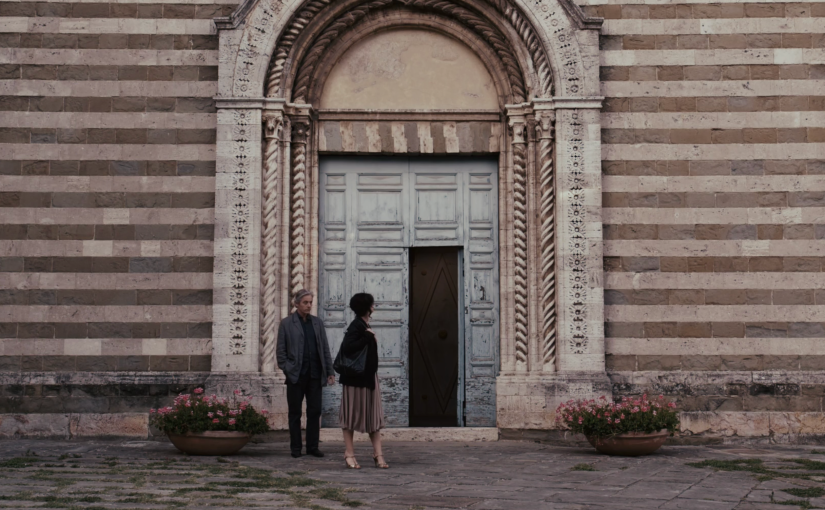 As a French antiques dealer known only as “She” wanders Tuscany with British writer James Miller, a transformation slowly takes place between the two. It isn’t purely visual, though we do begin to pick up on subtle changes in both Juliette Binoche and William Shimmell’s performances. It is more of a metaphysical shift, as if something in the air has moved around them. What starts as a friendly conversation between two intellectual strangers picking each other’s brains gradually becomes a fifteenth anniversary celebration between a husband and wife, sparring over the rifts that have widened between them over the years that have suddenly sprung into existence. Certified Copy might be able to be divided into two halves, but it isn’t so easy to pinpoint where one ends and the other begins.

For Abbas Kiarostami, the thin gap between fiction and reality has always been woven deeply into the fabric of his films, as has his affinity for naturalistic performances and pragmatic cinematography. Certified Copy may initially seem to be not so different. At first it could be read as an alternate version of Richard Linklater’s Before Sunrise, studying the burgeoning affection between a pair of romantic intellectuals through long tracking shots and eloquent dialogue. Miller’s recent book theorising that artistic copies and originals aren’t so different from each other is a matter of friendly debate in these scenes, and it is a testament to Kiarostami’s screenplay that such theorising still feels so loaded with emotional intrigue between both characters.

Eventually though, these high-minded discussions give way to a copy of their own. The strange period of time which exists between the two ends of this narrative is confounding in its formal shifts, setting up key character and narrative points before swapping them out piece by piece. Kiarostami’s sleight of hand is magnificently subtle, in one scene letting Miller tell a story of the disconnection he once witnessed between a woman and her son many years ago, before She hints that he is talking about her. If they just met, this isn’t at all possible, but soon enough even more contradictions arise that back it up. Miller’s monolingualism disappears to reveal that he in fact speaks French, thereby sharing a language with She, and references to “my child” soon become “our child”.

Are She and Miller merely hypothesising what their lives might be like if they were actually married? Or is the meeting at the start really the lie, meaning they have been together this whole time? If we were to take Miller’s word for it, the differences may be negligible, and both are equally valid. The comparisons to Before Sunrise eventually lead into Before Midnight parallels, where marital arguments erupt from micro-aggressions and silences simmer with mutual frustration. As Kiarostami skilfully and imperceptibly folds two realities in on each other, he continues to ponder the same questions that Miller posed earlier, though in a far more indirect manner. How can a copy lend us a better understanding of its original? Aren’t all artistic renderings a copy of something? And by that logic, must an original necessarily be more or less valuable than the copies it spawns?

For the most part, Kiarostami fights off the temptation to conform to shot/reverse shot editing in dialogue-heavy scenes by instead tracking his camera in long takes through Tuscan buildings and streets, where ancient and modern architecture co-exist. Reflections of our couple are frequently caught in windows and mirrors, creating visual facsimiles that continue to call back to their earlier discussions. In his layering of copies on top of other copies, we are forced to both confront the distance of these characters from reality and, at the same time, accept the emotional authenticity of what we are presented with.

Even when Kiarostami does resort to cutting between both She and Miller in static compositions, the staging is rarely so inert as to be unengaging. In some of their most integral conversations they are shot centre-frame, visually cut off from each other, though also gazing directly into the camera. Again, there is a duality baked right into the formal construction of these scenes, delivering two alternate perspectives of their fifteen-year marriage which has seemingly manifested out of nothing, and yet also appears fully formed in its depth and complexity.

In one close-up shot of Miller sitting across a restaurant table from his now-wife, a wedding party is being prepared in its background, setting up a striking contrast with the heated words spilling out in front of the camera. In fact, newlyweds basking in the excitement of marriage can be found dotted all along our passage through Tuscany, and an older couple even takes the time to offer She and Miller some marital advice during a friendly stroll. We may recognise these people as embodying the “real” thing, but they don’t exhibit nearly the same amount of complexity and detail as the two facsimiles at the centre of it all. Copies She and Miller may be, but this is not to the detriment of these compellingly malleable characters, who can barely settle on a single version of objective reality. To Kiarostami, such is the nature of our deepest relationships that they can feel freshly original and frustratingly repetitive at the same time, and it shouldn’t be a huge leap to accept both as equally valid truths.

Certified Copy is currently available to rent or buy on iTunes, YouTube, and Google Play.