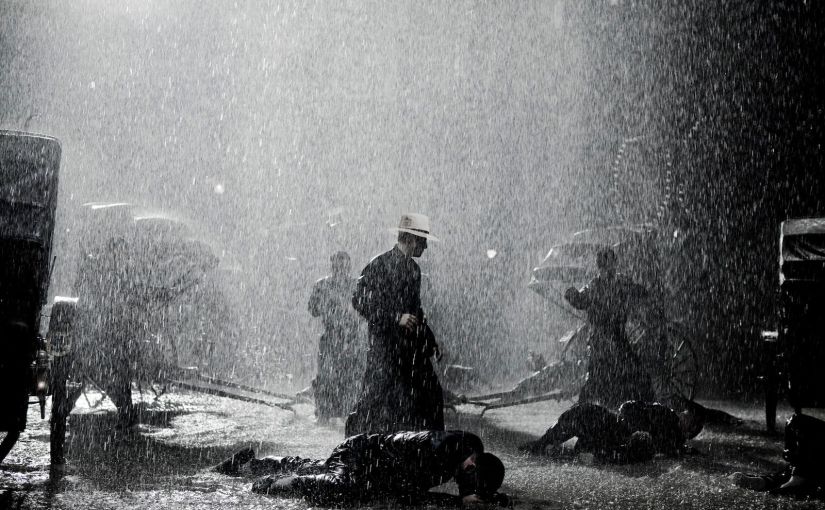 The kung-fu of The Grandmaster is more than just a kinetic explosion of violence aimed at bringing an opponent to their knees. For Wong Kar-wai, it is about the precise impact of every tiny motion. A punch landing on a concrete pillar, shaking the snow off like a mini earthquake. Raindrops bouncing up off dark puddles. The swift draw of a blade to land exactly where it is intended. In one conflict between rivals Gong Er and Ip Man, the contest comes down to who is the first to break a piece of furniture, the latter eventually losing when he accidentally splits a staircase. Wong has rarely indulged so much in the fast pacing and fierceness of action cinema, and yet the delicate attention to detail in his slow-motion cinematography, extreme close-ups, and elegant choreography also ties The Grandmaster to the brooding, lyrical style that he has spent decades honing with such meticulousness.

The rise of Chinese martial artist Ip Man to the position of Grandmaster is the subject of Wong’s fascination here, and his regular collaborator Tony Leung draws on an entirely new skillset in taking on the role of the Wing Chun expert. His composure exudes authority, and when he wears that wide-brimmed fedora in dimly lit scenes of rain and smoke, he even strikes the figure of a film noir hero, finding a balance between the light and dark that resides within him. In his pairing with Zhang Ziyi as Gong Er, there emerges something subtly mystical that transcends the traditional biopic format – across decades of their lives, neither seem to age.

Though there is a mutual affection and trust that is revealed between them over years of war and political turmoil, the two move in very different directions, with Ip Man starting a family and Gong Er choosing to seek vengeance on her father’s back-stabbing student, Ma San. Perhaps these experiences are the foundation for their attitudes towards elitism in martial arts, with him hoping to teach younger generations the techniques of Wing Chun, while she refuses to divulge her father’s secrets of the Baguazhang to anyone else.

In stretching his narrative across the 1930s to 50s, Wong gradually expands its scope to epic historical levels, and the visual splendour of Wong’s snowy landscapes, dark alleyways, and sumptuously designed manors more than matches its grandeur. Just as significant as his gorgeously staged wide shots though are those close-ups that tune into the sizzle of a cigarette or the graceful swish of a foot through a puddle, bringing a visceral impact to every single movement and strike amid scenes of otherwise fast-moving combat.

It is especially in the train station scene where Gong Er finally take her vengeance upon Ma San that we see Wong at the height of his stylistic powers, diffusing dim, golden light through the smoke and snowflakes that gently blow across the platform. His camera dances with the opponents in dazzling whip pans and slow, deliberate motions, while right next to them a train picks up its speed, its moving lights, ringing bells, and clacking sounds underscoring their conflict with its own dynamic, accelerating rhythm.

Even without his regular cinematographer Christopher Doyle beside him, Wong proves that he not only has the eye to capture jaw-dropping imagery, but the editing skills as well to bring us deep into the art of combat. Ip Man himself would go on to teach Bruce Lee among other skilled martial artists, though it is through the struggles and remarkable feats of combat captured in such delicate detail in The Grandmaster that Wong delivers a beautifully artistic impression of the man beyond the lessons he left behind.

The Grandmaster is currently available to rent or buy on iTunes, YouTube, and Google Play.