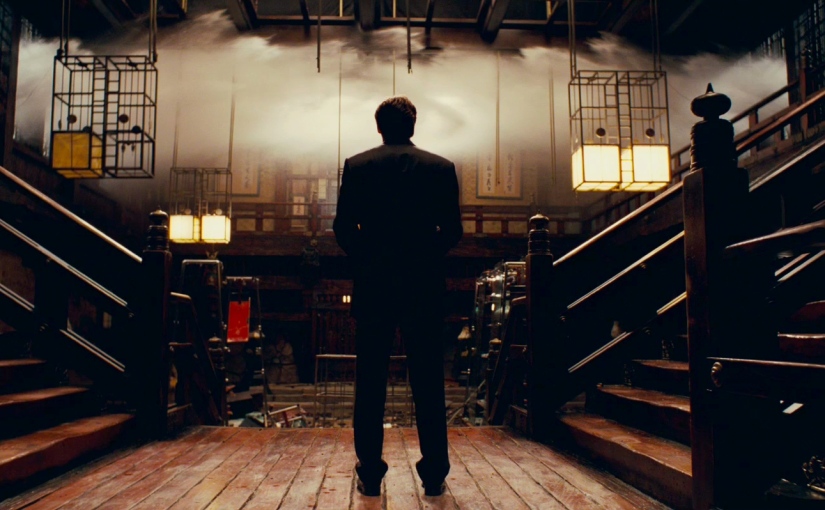 No doubt a landmark of visual effects, but even if all of these were taken out (and I would hate to imagine doing so), Inception would still be Christopher Nolan’s greatest achievement in mise-en-scène. He had already established himself as a master of experimental narrative form by this point, and he continues to demonstrate that here in exploring the internal dream worlds of his characters through a nesting doll-like structure. But it wasn’t until he combined this with the sort of epic, ambitious visual style he first fully displayed in The Dark Knight that he became a generation-defining filmmaker, shaking the world with this mind-bending exercise in sheer imagination.

The lighting and set dressing of Nolan’s interiors are as sharply arranged as ever, announcing themselves loudly right from the start in a conference room lit by rows of hanging lanterns and translucent golden walls, providing a sullen backdrop to the meeting between Cobb and Saito. The two men and their surroundings are reflected in a giant, glass table, consuming them in this sleek, angular modernist architecture which continues to define the rest of the film’s luxurious aesthetic. It also helps us through some stretches of exposition, demonstrating the complex rules of the dream world in practical, reality-bending illusions not unlike those that Stanley Kubrick innovated in 2001: A Space Odyssey.

Nolan doesn’t stop there though. The epic establishing shots of Inception are among the best of his career, if not the decade, and the fact that this narrative just keeps moving from one expansive, detailed setting to the next gives him the perfect opportunity to keep building fully-detailed worlds in large-scale compositions. A military fortress on a snowy mountainside, a high-end hotel, an empty, crumbling city – as disparate as these locations are, Nolan continues to bind them all together with the parallel editing he has always possessed such a fine control over, and yet up until this point had never executed nearly as well.

The “kick” is an especially effective conceit that allows his intercutting to reveal the interactions between each dream layer, whereby obstacles in one echo further down the line. Nolan draws a direct line of impact from a car falling off a bridge, to a weightless fight in a hotel corridor, and further along to an avalanche erupting from a mountaintop, formally earning his set pieces by establishing the interconnectedness between them. On top of this, Nolan demonstrates the variable progression of time between each dream layer in playing out some of these set pieces in gorgeous slow-motion, stretching and manipulating time to let some plot threads take a backseat while new ones emerge, and eventually wrap back up in reverse order.

Just as the smaller, more personal narrative thread concerning Cobb’s deceased wife, Mal, serves the larger story in making his unresolved trauma a constant threat to his team’s mission, so too does it bring personal stakes to the act of inception, revealing the catastrophic damage that can be done in altering others’ subconscious. Nolan hasn’t always poised the personal against the epic so masterfully, but when he strikes that balance we get something just as moving as it is dazzling. As the growing number of plot threads of Inception emerge and intertwine, Nolan continues to keep his surreal vision of worlds existing within worlds all under precise control, thereby crafting the sort of imaginative, ambitious cinematic concept that only he could have pulled off.

Inception is currently available to stream on Netflix Australia, and available to rent or buy on iTunes, YouTube, and Google Play.