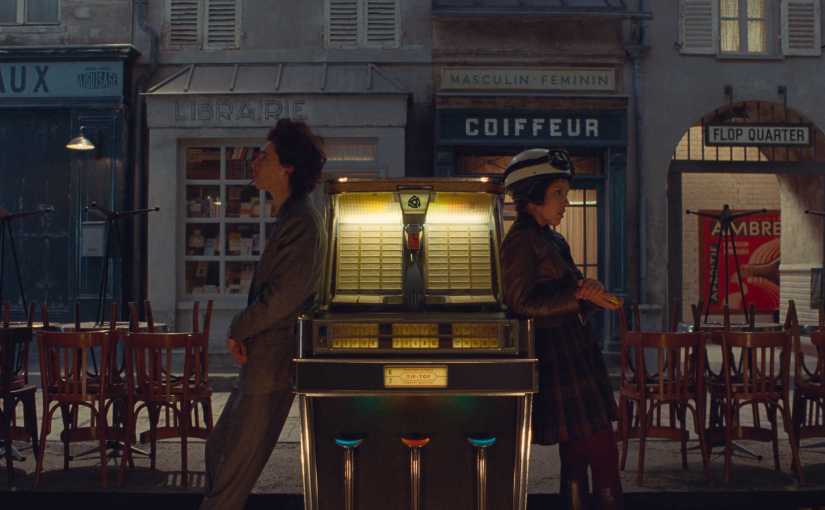 The French Dispatch. Some are calling it Wes Anderson’s most ‘Wes Anderson’ film, as if that were a negative thing. It’s not – Anderson is one of the boldest working directors, unrelenting with his cinematic vision and frequently rubbing up against accusations that his style is too stilted and unnatural. The French Dispatch isn’t going to convince anyone otherwise, though it would be tough to argue that he demonstrates anything less than a thorough understanding of cinema’s full potential here. This is his tribute to storytellers, or more specifically those journalists who pick up on odd stories in small towns, and with his anthological structure he constructs a dazzling formal cinematic statement, alternating between black-and-white and colour much like the magazines his characters produce. With a keen comedic sensibility and astounding visual flair, The French Dispatch will undoubtedly go down as one of Anderson’s finest works.

The Tragedy of Macbeth. As one of the greatest displays of mise-en-scène in a year full of beautiful films, it is clear this is a huge miss on behalf of the critical consensus, sitting outside 2021’s top 25 films on the TSPDT 21st century list. It is a bold new direction for Joel Coen who has already spanned so many genres – neo-noirs, westerns, comedies, crime films, and yet this is the first to dig so deeply into expressionistic influences of older European directors like Fritz Lang and Ingmar Bergman. The deftness and intelligence of the script goes without saying, though obviously the credit for this must go more to Shakespeare than Coen. It is in the visual direction where he takes this classical narrative to transcendent heights, creating a claustrophobic world of shadows, fog, and barren landscapes that reflect the same decrepit darkness that resides within Lord and Lady Macbeth.

Drive My Car. Ryusuke Hamaguchi draws on a Haruki Murakami short story to craft a three-hour epic drama based in Japan’s contemporary theatre industry, additionally using the works of playwrights Chekhov and Beckett as springboards into examinations of grief and companionship. This is currently sitting at #1 of 2021 on the TSPDT list, and I might be closer to #25. It is a very fine film, slow and meditative in its pacing and backed up by a strong script, but from a direction standpoint there is far less going on here than a number of other films that I have ahead of it. Hamaguchi is evidently a good filmmaker, but Drive My Car doesn’t push its cinematic style or form enough to earn its #1 spot.

Passing. Rebecca Hall makes the leap from acting to directing with a complex examination of racial prejudice and identities in 1920s New York. She carries a bit of Paweł Pawlikowski’s style in her blocking of actors on the edges of her frames and her choice to shoot in black-and-white, but it is especially in her use of shallow focus to obscure our perception of this hazy world that she dedicates the film to a specific aesthetic and follows through on it to the end.

The Green Knight. Its release on Amazon Prime came right before awards season kicked off, but it is a major artistic breakthrough for David Lowery. It calls back to Arthurian legend in adapting the tale of Sir Gawain and the Green Knight, and it thankfully doesn’t compromise its fantasy with attempts to ground it in historical realism. It doesn’t waste time trying to explain itself, but rather compels us to engage with it on a symbolic, mythological level, basking in its marvellously creative production design and otherworldly cinematography. The closing twenty minutes of this film may just be the best of any in recent years.

Oscar Isaac is one of the most consistently great actors currently working, but the performance he gives in The Card Counter is an achievement that rivals his career-best work in Inside Llewyn Davis. He is morose and austere, gazing out at the world from beneath heavy lids with an unblinking focus, and is perfectly suited to Paul Schrader’s deeply self-reflective character study of regret, self-discipline, and atonement. Timothée Chalamet proves he can lead blockbusters as much as he can indie dramas with Dune, and carries the archetypal character of Paul Atreides with great emotional weight, as does Dev Patel in The Green Knight with his grand medieval quest, facing up to the consequences of his own rashness. Bradley Cooper is the perfect showman and con artist in Nightmare Alley as Stanton Carlisle, but he also knows when to turn it down, making for a particularly haunting delivery of his final line. If Joaquin Phoenix‘s contorted performance in Joker was expressionism, then his role as the awkward uncle Johnny in C’mon C’mon is pure realism – a very purposeful shift on his part that shows off his range, proving he can play sweet and wholesome just as well as he does dark and intense. Benedict Cumberbatch claims a mention for The Power of the Dog, playing against type as Phil, a gruff, menacing rancher, then peeling back the layers to his vulnerability. Lastly, Denzel Washington deserves a nod for The Tragedy of Macbeth, delivering a take on the titular Shakespeare character with great verbal dexterity and aplomb.

Kristen Stewart takes the number one spot of the year, and it isn’t terribly close. Before Spencer it was a common misconception that she is a poor actress, but she proves all the doubters wrong in her portrayal of Princess Diana, playing the doomed royal not as how history has recorded her, but as a subjective rendering of her own unstable psychology. Cate Blanchett is a perfectly ice-cold femme fatale in Nightmare Alley, and Frances McDormand wields a skilful control over the weighty and loquacious material of The Tragedy of Macbeth. It is very much a return to her theatrical roots, and Lady Macbeth is an incredibly natural fit for her. Tessa Thompson and Ruth Negga are paired here for their equally excellent performances in Passing, playing a pair of old friends set on very different paths in life. Very gradually, both crack under external and internal pressures around their identities, and the two actresses movingly uncover their characters’ compelling complexities. Lastly, Thuso Mbedu pulls off a great feat in carrying The Underground Railroad through its heaviest, most punishing moments, and keeping that stamina up throughout the entire series.

After a disappointing down year, the film industry came roaring back in 2021 with many postponed films finally getting their release. The French Dispatch is notable among these – had it been released according to its original schedule, 2020 might have been able to lay claim to at least a single masterpiece. No Time to Die also made headlines as the first major film to have its release date pushed back, going for the complete opposite strategy as Christopher Nolan’s Tenet, and it was clearly the smarter decision in terms of making a profit. Ridley Scott makes a big mark in having both House of Gucci and The Last Duel come out this year as well, the latter of which was rescheduled from 2020.

Spider-Man: No Way Home tops the box office, grossing a staggering $1.8 billion and bringing a jolt of life back to cinemas during the COVID pandemic. No Time to Die, Shang-Chi and the Legend of the Ten Rings, and Eternals are also deservedly up there, but Dune is the defining blockbuster of the year where artistic quality and popularity collide. It is Denis Villeneuve’s highest grossing film yet, and further sets him up as an auteur for a generation.

Streaming services were the saving grace of 2020, and they remain strong here. The Tragedy of Macbeth is the first time Apple TV Plus has produced a film of this quality, and Amazon Prime Video has continued to get behind bold visionary auteurs with The Green Knight and The Underground Railroad. Netflix is also in the game, picking up Rebecca Hall’s stunning debut Passing and bringing back Jane Campion after her 12-year break with The Power of the Dog. Adam McKay also concludes his freakout trilogy (The Big Short, Vice) on Netflix with Don’t Look Up – the weakest of the three but still worthy of praise for its editing and performances.

2021 showcases the first crop of films produced in the difficult era of COVID with reduced cast sizes and closed-off sets. Maybe this is the reason so many harken back to theatrical roots, or perhaps it is just coincidence, but either way it was a big year there. We have three great classical auteurs working in the realm of Shakespearean tragedy (The Tragedy of Macbeth, West Side Story, House of Gucci), and the works of playwrights Anton Chekhov and Samuel Beckett play significant roles in Drive My Car, where productions of Uncle Vanya and Waiting for Godot are featured. When it comes to musicals, we have West Side Story, Tick, Tick… Boom!, Cyrano, and Annette.

Black-and-white cinematography has had a resurgence of late, but with The Tragedy of Macbeth, C’mon C’mon, Passing, Belfast, large sections of The French Dispatch, and the ‘Vision in Darkness and Light’ cut of Nightmare Alley, 2021 proves to be a particularly significant year here. I would hesitate to put the influence solely down to Roma from 2018, but its impact is certainly at least felt in the rise of memory pieces based on directors’ childhoods, with both Belfast and The Hand of God explicitly crediting Alfonso Cuarón’s recent masterpiece.

Lastly, Jonny Greenwood is at the height of his musical powers, composing three very different scores for Licorice Pizza, The Power of the Dog, and Spencer. His work on the last two are particularly impressive, with Spencer standing tall as a landmark of his illustrious career. Hans Zimmer contributes his extraordinary talents to No Time to Die and Dune, the latter of which would not be the same film without his epic score. Nicholas Britell is also very active in this space in composing for Don’t Look Up, though as always it is his collaboration with Barry Jenkins that is especially remarkable – the music for The Underground Railroad stands proudly alongside Moonlight and If Beale Street Could Talk as one of the best film scores in recent history.